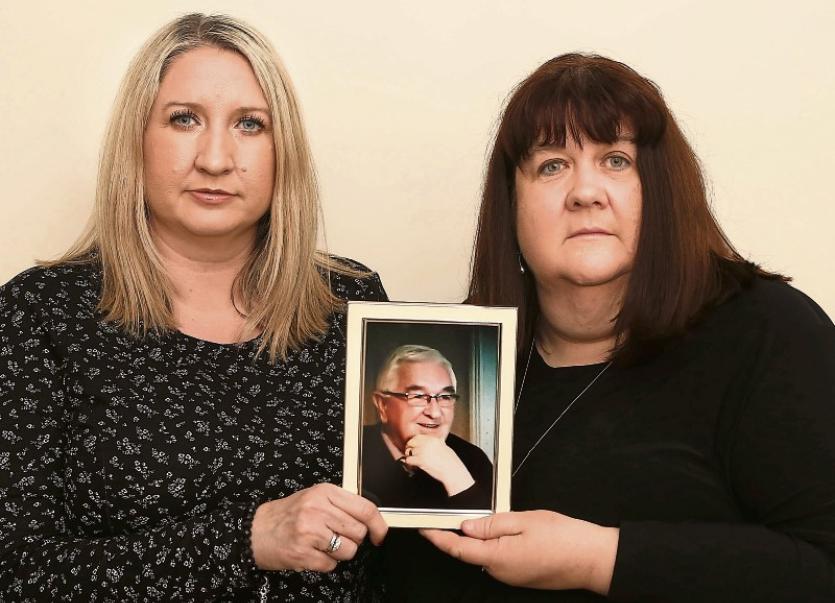 Emma and Deirdre Brennan from Portlaoise whose father John died of sepsis after a routine operation. Photo: Michael Scully

The family of a Laois man who fell ill and died five days after a successful hip replacement operation want to make people aware of the danger of sepsis.

John Brennan from Rathleague in Portlaoise went into the Beacon hospital for an operation on November 23 2017. Aged 76 he was a healthy man, still working as a building contractor on the day he went into hospital.

He was also a successful building contractor who built houses in Aghnaharna and Ashwood Walk estates in Portlaoise.

John was also a loyal member of Laois Fianna Fáil.

“He was sociable, he was a hard worker all his life, he rose early every single day,” his daughter Deirdre told the Leinster Express.

They were very close to their parents and particularly to their father after their mother died of cancer in 2010.

“He kept the show on the road. He cooked dinner for us during the week and we had a family dinner Friday night, then I would do Sunday dinner,” she said.

“He even cooked Christmas dinner, he never cooked before mam died but he bought a cookbook and he got a cleaner, he was very independent. The only thing he needed was our company, he would call us two or three times a day,” she said.

“He had never been in hospital all his life. Our mother died in a public hospital where she got brilliant care. He went private to the Beacon hospital for the operation and you assume you would get the best of care,” she said.

The operation was to help with his painful arthritis.

“The operation was a complete success, it was a straightforward operation,” said Deirdre who with her siblings Emma and Niall were by their father’s side.

However within days her dad’s health quickly deteriorated, she said.

“He started to complain that he felt unwell and nauseous. He became increasingly confused and had a temperature. They checked and couldn’t find any sign of sepsis,” she said.

By Monday night November 27 John had gone into multiple organ failure and he was put on a ventilator to breathe.

He died on the morning of November 28, the day he was due to be discharged.

“It was dreadful, he was being discharged on Tuesday morning for respite care in a nursing home, and instead he died. We left the hospital with no father,” she said.

A post mortem was later carried out which showed that he died from sepsis due to pneumonia.

“We were absolutely stunned. I don’t think you ever get over it. Our mam had a protracted death so we have experienced both types. It’s the shock,” she said.

“The coroner ruled that it was sepsis. S he made two recommendations to provide more training for staff,” she said.

She recommended that the hospital offered training on the transition from paper to electronic patient record system, and to implement active communication of investigation results between nursing and medical staff.

The Brennan familynow want others to know more about sepsis.

“We urge everyone to know the signs and symptoms. Don’t be afraid to ask if it could be sepsis if you are with someone in a hospital or at home. All the doctors say that early intervention might reduce the risk of death,” said Deirdre.

“He mightn’t have been saved, but we hadn’t heard of it before our daddy passed away.” she said.

“We hope it makes someone think. We don’t think there is enough awareness. It really shocked us as we had no knowledge of it. You don’t think of those things,” she said.

They advise on what to do if sepsis is suspected.

“Sepsis is a severe infection affecting the whole body. It can cause serious illness and even death. It is vital to get early treatment if you think you, or a loved one, might have sepsis,” they say.

It is becoming more common due to people living longer, increased use of antibiotics leading to germs that are resistant to antibiotics and more patients living with weakened immune systems.

Symptoms may include slurred speech, confusion, weakness, heartbeat of more than 90 beats a minute, fast breathing of more than 20 breaths a minute ( in adults).

There may be insufficient urine or urine that is dark and smells bad. Rigors, chills, severe shivering and/or high temperature. Skin is cold, pale, mottled or warm and flushed.

It is more likely to occur in babies, especially premature babies, in frail, older people, in people who have recently had surgery or have a wound, people with catheters or on drips, and people with lower immune systems. 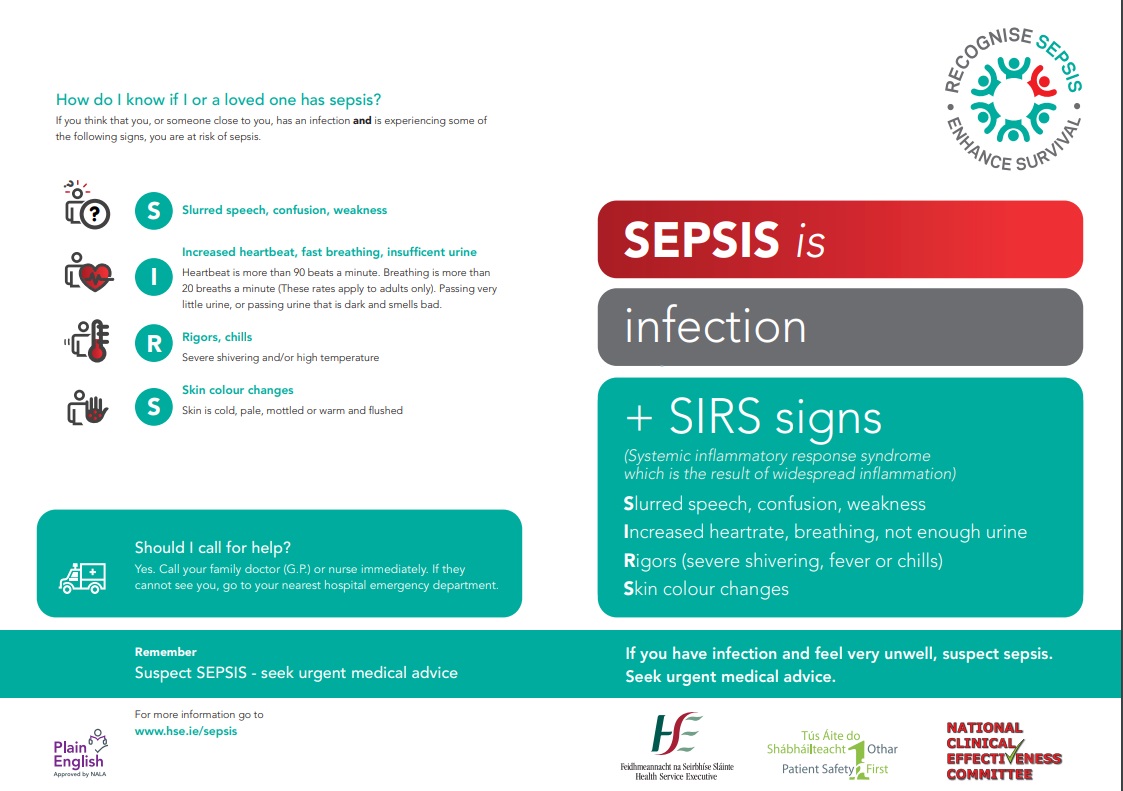 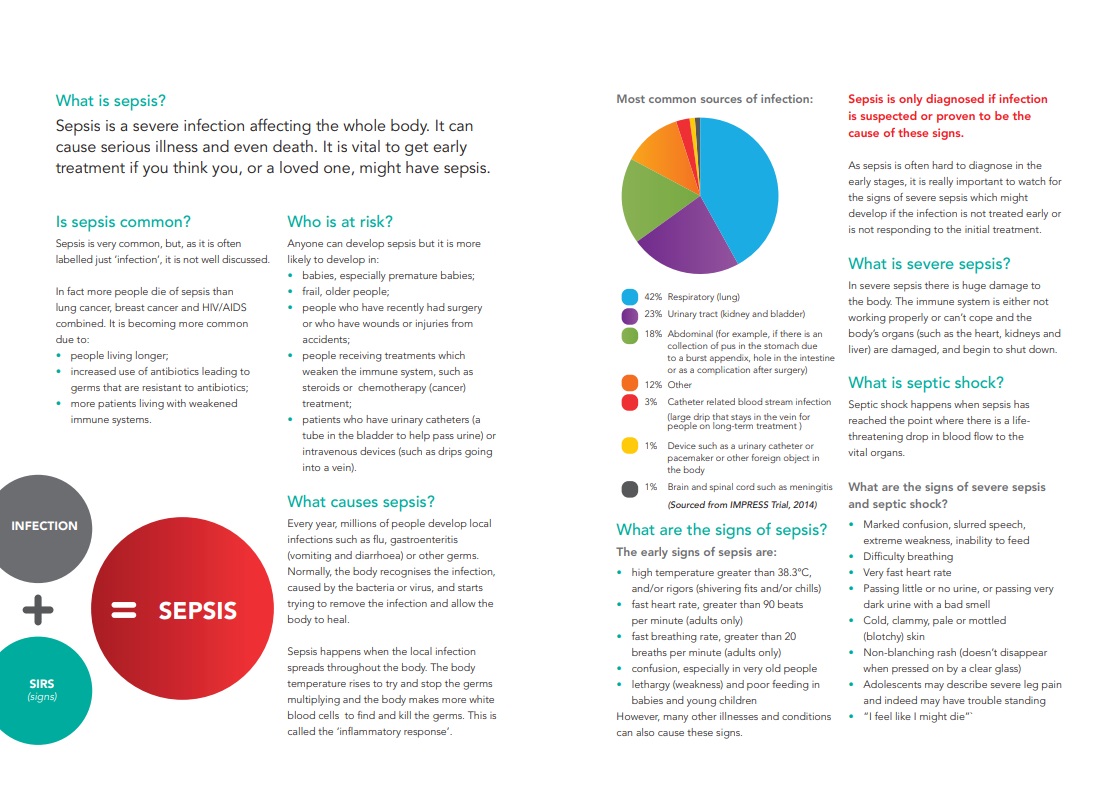