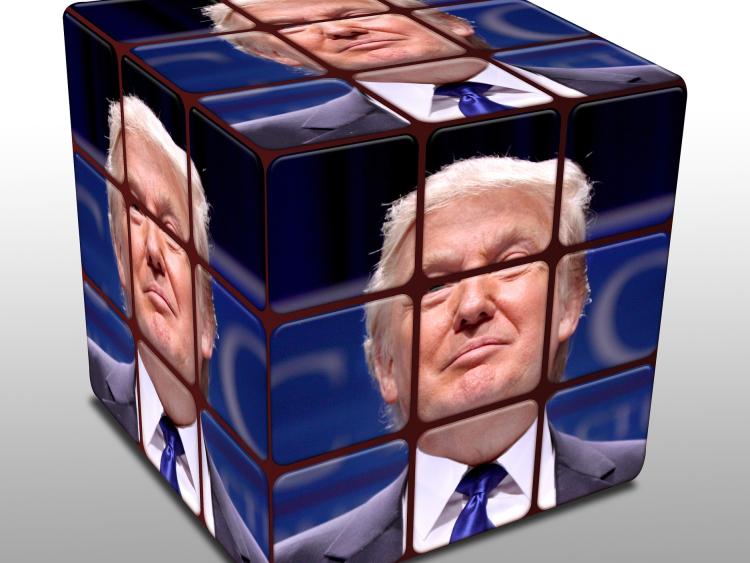 We have seen many sides to Donald Trump over the last four years.

Wednesdays are turning out to be days of significance in the USA in 2021.

We are only a few weeks into the year, but successive Wednesdays have seen an attack on the legislative part of the US Government, an historic second impeachment and then on Wednesday, January 20, 2021, Joseph R Biden and Kamala D Harris will be inaugurated as the leaders of the Executive Branch of Government in the United States.

These events have usually happened over decades, but in keeping with the events of 2020, the apparent drama and speed of occurrences appears to be of little surprise to most political observers.

Joe Biden and Kamala Harris made history when they amassed 81 million votes at the beginning of November.

Biden will become the oldest and only the second Catholic to become US President.

Biden, of course, also wears his Irish heritage as a badge of honour and has already appointed a prominent member of the Irish American Community, Marty Walsh (Mayor of Boston) as his new Secretary of Labour.

Harris will become the first woman of Indian/Caribbean ancestry to hold a Vice-Presidential office.

They received a record number of votes in any US democratic election and are mandated, amongst other things, to take control of the pandemic in the USA which is now claiming about 4,000 lives per day.

Biden and Harris are also hopeful with Democratic control of both Houses of Congress to pass a series of economic stimulus Bills to make societal and business improvements.

Their inauguration therefore is an historic event in any other year.

But in 2021, it has the added intrigue of being an occasion which will have at least 20,000 armed US National Guards in the US Capitol.

Not since the first inauguration of Lincoln in 1860 has the US witnessed such a military presence at the swearing-in of a President.

This is due in no small part to what the New York Times stated that ‘Sixteen groups — some of them armed and most of them hard-line supporters of President Trump — have registered to stage protests in Washington, prompting deep concern among federal officials about an event that has historically been a packed celebration of American democracy.’

But why is this level of protest happening?

The United States is a divided nation in many respects - borne out of its history, culturally, racially, socio-economically, even religiously.

Biden’s victory, while statistically impressive and involving the biggest defeat faced by an incumbent President since 1932, has not been legitimately accepted by the outgoing President.

Since the wee hours of November 8th, President Trump has declined to accept the electoral outcome and through social media, legal challenges and concerns raised by many members of his Republican Party, he has sought to challenge the validity of the democratic will of the American people.

For many commentators, this has allowed a narrative to develop that the election was unfairly stolen from Trump and a consistent and continual challenge to Biden and Harris’ victory has given many of Trump’s supporters what they perceive to be a constitutional right to contest the results of November 2020.

The result of the anger, fomented by many extremists, was demonstrated in the aftermath of a rally led by Trump and his political and legal supporters on the first Wednesday of the New Year - January 6th, 2021.

As many witnessed, a crowd of thousands invaded the US Capitol building.

Their ultimate goals may have been varied, but to some, it was believed that they wanted to overturn the constitutional process of counting each states Electoral College votes for Biden and declare Trump as the rightful winner of the election.

These stunning developments ended in panic, fear, and tragedy as at least five people were known to have died as a result of these events.

Subsequent eye-witness accounts that are still emerging, show the intent of many of the ‘mob’, varying from ransacking the Legislative chambers of the House of Representatives and Senate to the attempted assassination of members of Congress.

The second Wednesday culminated in the historic impeachment of Donald Trump on charges of incitement of insurrection.

However, it was momentous in the fact that for the first time a sitting US President who had lost the popular vote twice, was now impeached twice.

Many representatives from the Democratic Party railed against Trump’s words and actions over the previous two months and they were aided by an incredible level of support from a senior Republican, Liz Cheney.

As the Guardian stated: ‘In a strongly worded statement released on Tuesday, Cheney, said that Trump had “summoned this mob, assembled the mob, and lit the flame of this attack. Everything that followed was his doing,” she said.

Trump’s trial will begin after Biden’s inauguration and 67 US Senators will need to vote to convict him of high crimes and misdemeanours.

The third eventful Wednesday of 2021 will ultimately see Biden and Harris be inaugurated in a divided and fearful US capital.

Even with the concern caused by opponents of the Democratic leaders, the Biden team, according to the New York Times has stated that ‘he was determined to make an outdoor appearance at the event to call on a divided nation to come together at a time of political and public health crisis.’

Both leaders have an awesome task of uniting a divided country and finding a speedier way to help the nation recover from the coronavirus pandemic and its social and economic consequences.

Plans are afoot for a 1.9 trillion-dollar economic stimulus package and to re-engage with the Paris Climate Agreement.

Biden’s approach to Ireland, both North and South in the wake of our concerns with coronavirus and the economic and political fallout of Brexit will also be of huge significance.

Ireland and the rest of the world will be watching with interest to witness what future Wednesdays (and other days) will bring in 2021.