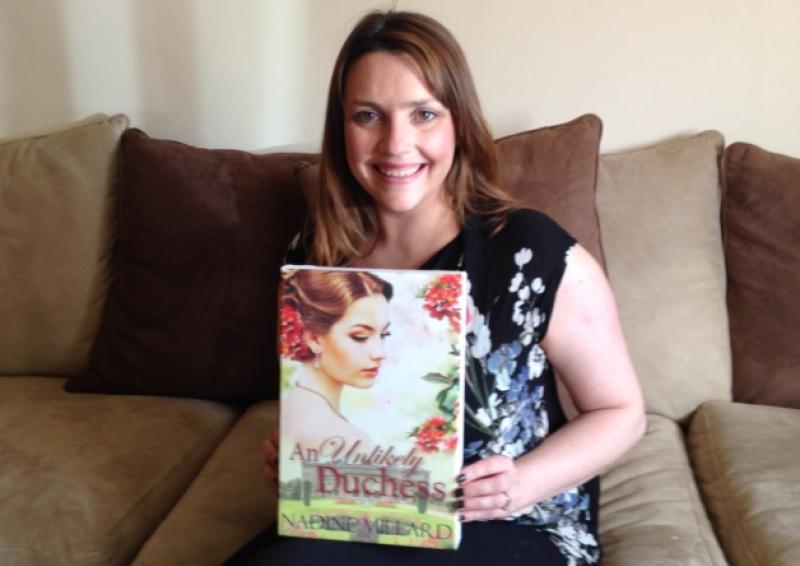 Mountmellick mother of three Nadine Millard was inspired to write her first novel while walking in Emo Court with her three children.

Mountmellick mother of three Nadine Millard was inspired to write her first novel while walking in Emo Court with her three children.

“I think I should have been born there! The part in my book where he sees her for the first time at a lake, popped into my head at Emo. The whole thing spiralled from there,” she says.

‘An Unlikely Duchess’ was released on Amazon as an e-reader a fortnight ago, debuting at number 28. It has already been read by thousands of fans who pay just a couple of euros to download it to their devices.

“I am getting emails from fans, saying please tell me you’re writing a second book. Six months ago that was me, it’s hard to believe,” said Nadine, 31.

A Regency romance, her book tells the story of Edward Crawdon, Duke of Hartridge who comes to Ireland. He is contracted to marry the daughter of an old friend, but instead falls for her rebellious younger sister, forcing him to decide between duty and his heart.

“It’s pg stuff, my mother has to read it. It’s no fifty shades, I would have to use a pen name, I’d never be able to face her,” laughs Nadine.

Last September Nadine had just begun a degree course in English and History in DCU, when she happened to message her favourite Regency author to ask about her new book. American author Rachel van Dyken then invited Nadine to send any writing she had done for a critique.

“I had an idea for years based in Emo, so I said I would get off my butt and write it,” says Nadine.

She found the time to write in the mornings while her children Ryan, Casey and Luke were at school, and after they went to bed.

Nadine emailed in three chapters of her novel, and the author quickly replied asking for a full book. More emails followed resulting in a publishing house Blue Tulip snapping it up and sending out a contract.

“I couldn’t believe it, there was a 7 hour difference so I was there bathing the kids exchanging emails about the book, it was surreal,” remembers Nadine, who has a degree in law and so was able to handle contract and royalty negotiations herself.

She decided to defer her degree course and got working hard on finishing the book, with the help of her sister Lorraine to mind the children.

“My husband Larry is abroad a lot, he was gone for three weeks close to the final edit, so I was up till 2 or 3 in the morning working,” she said.

By February it was complete but there was more to do.

“I naively thought I just had to write it, but I had to work with a designer and a cover artist for the book, and they are building a website for me, nadinemillard.com. It has snowballed,” says Nadine.

She says there are no millions to be made just yet.

“The average author in this genre earns about €15,000 a year if they have best sellers. The contract includes movie rights, that‘s where the big money is. I am just doing what I enjoy, what I have a knack for. I might go on to a young adult series, the likes of Twilight,” she says.

Already working on book two, she is delighted to be immersed once again in her characters.

“I missed them. People say ‘I want to write a book’, just do it, give it a bash,” says Nadine.