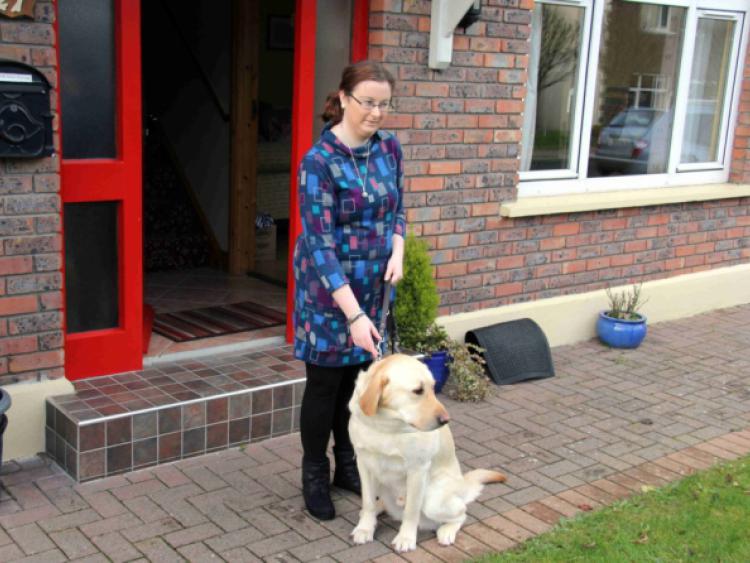 Growing up blind was, for most, a positive experience for Noreen McInerney. The 21 year old from Portlaoise has been severely visually impaired since birth, and so she has learned to live with her disability.

Growing up blind was, for most, a positive experience for Noreen McInerney. The 21 year old from Portlaoise has been severely visually impaired since birth, and so she has learned to live with her disability.

At times, however, Noreen found it ‘pretty stressful’ to do the normal things, like being able to get around by herself, or have a social life. This all changed on August 16 2013 when a new friend walked into Noreen’s life. His name is Huw (pronounced ‘Hugh’), and he is now Noreen’s guide dog.

“Before I had Huw, it was pretty stressful, and I hadn’t much of a social life. I had to use a long cane the whole time to get around and it was a lot harder to do things.

“People weren’t as obligant and friendly, because they didn’t understand I suppose. But now they see Huw and they know,” she told the Leinster Express.

The Irish Guide Dogs Association provided there services to a record number of 197 people in 2013, Noreen being one of them.

All services are provided free of charge, and they include the Guide Dog programme, the Assistance Dog programme for children with autism, the mobility programme which includes long-cane training and independent living skills for the blind, and child mobility training.

Huw, who is a cross between a labrador and a retriever, was trained for two years in the Irish Guide Dogs Training Centre in Co Cork.

Noreen also received three weeks of training at the centre last August, where she learned how to use and care for her guide dog. All training was provided free of charge.

As a guide dog, Huw adapts very well to new environments, and Noreen commands him using different words and actions.

Huw has brought a sense of normality to Noreen’s life. She’s more independent and has made many new friends.

“The reaction I’ve been getting from people is a lot more positive and friendly, and I’m treated more like a normal person now.

“He’s changed my life, I’ve so many friends now because of him. I go to Supermacs, the cinema, the hairdressers, the beauticians, everywhere!” she said.

Like any dog, Huw is quite playful and attention-seeking, and very clever. Noreen likes to bring him for long country walks.

“I have to be careful because he goes mental if you bring him near ducks.

“One day I was walking down a narrow path, and he kept pushing me in with his paw. My mother was laughing, she said ‘He’s not going to let you walk down this path’. He’s very protective over me,” she said.

Although Huw’s training was fully funded by the Irish Guide Dogs Association, the expenses don’t end there. All expenses after training are paid for by the dog owner. The lifetime cost of a guide dog, including training, is €38,000.

“Once I got him I had to pay for everything. I buy a 20kg bag of food for him for €50 and that lasts about six weeks. Then he has his visits to the vet, for checkups and vaccinations. And I had to get him insured too,” she said.

More than 80% of Irish Guide Dogs’ income comes through voluntary donations, and it costs more than €4.8 million annually to run the organisation and meet the demand for services.

Noreen wants to give something back to the Irish Guide Dogs Association, for providing such an excellent service, and changing her life.

“As soon as I got Huw I got involved in fundraising for the Irish Guide Dogs Association. Me and Huw have sat outside many places, like the church and Dunnes Stores, collecting money. I really want to give something back,” she told the Leinster Express.

The Irish Guide Dogs Association was delighted to announce that, even while working in a difficult financial climate, it managed to raise more money through fundraising in 2013 compared with 2012.

Padraig Mallon, CEO of the Irish Guide Dogs Association, said that the charity exceeded expectations by providing services to a record-breaking 197 people in 2013.

“This is a great achievement in challenging times and it is reassuring that the public continue to value our work and trust us to deliver much-needed services for people who are vision impaired and for families of children with autism.

“With the public’s support and the hard work of our team we aim to train 240 people in 2014 and looking further ahead we have a target of training 266 people in 2016.

“The targets are not just a number. What is really important is 266 lives we will change for the better,” said Mr Mallon.

While there is a long waiting list of people who desperately need a guide dog, Mr Mallon said that all of the dogs must be trained to very exacting standards so that they can be a life-changing resource for the recipient family.

“Training is a lengthy process and every single dog that goes through the programme is trained to the highest possible standards. The fact that all of our services and supports are offered free of charge means that anybody who needs our services can get them without having to worry about whether they can afford it.

“We are aiming very high this year and based on our performance last year and the amazing support of the general pubic I think we can achieve it,” he said.

With her new-found independence, Noreen hopes that she can finally persue a career in sports massage therapy.

“I’m hoping to start a level 7 Fetac course in sport massage soon, and it’s for two years. I’m really interested in massage and alternative therapies and medicines, and I love helping people.

“I cannot emphasise enough how much Huw has changed my life. He plays such an important role in being my guide, and I wouldn’t be able to acheive all of this without him. I would like to thank the Irish Guide Dogs Association for all they’re help and support,” she said.