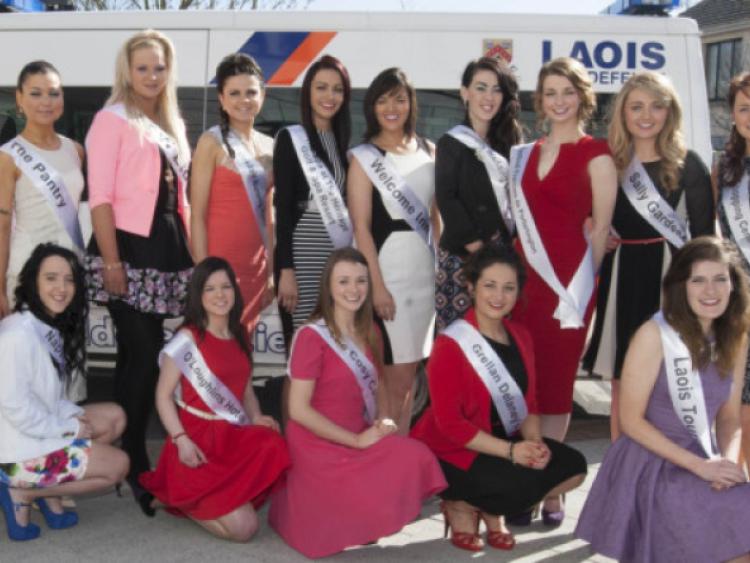 The 2013 Laois Rose hopefuls went on a whirlwind bus tour of the county on St Patrick’s weekend. Their first official duty as prospective Roses, the 18 girls were treated like royalty for the day.

The 2013 Laois Rose hopefuls went on a whirlwind bus tour of the county on St Patrick’s weekend. Their first official duty as prospective Roses, the 18 girls were treated like royalty for the day.

The day began and ended in the Portlaoise Heritage Hotel, where the girls had their photoshoot for next week’s Laois Rose 2013 profiles in the Leinster Express.

They then called in Bankz Hair and Beauty, where they met with the owner Barbara Aldritt and her daughter Kodi, who was a mini Rose, complete with the all-important sash.

Laois Shopping Centre was the next stop, where they received a big welcome from manager Kevin Doyle.

“The girls took a train ride around the shopping centre, and were presented with goody bags and St Patrick’s Day gifts from some of the shops. Kevin Doyle, his staff and the various shops in the centre looked after us so well. It was a great start to a great day,” Laois Rose co-ordinator, Sharon Preston said.

The Roses then boarded the Civil Defence bus and headed for Portarlington where they were met with champagne and roses at Adrian Dunne Pharmacy. They also met with the French Festival committee.

Next stop was Oakvale nursing home, where the residents played the Rose of Tralee to the girls as they arrived.

It was then on to the Mountmellick Civil Defence base to see their equipment and how they use it before their final stop at the Cosy Cafe in Mountrath.

“We had rose cupcakes in Mountrath and some of the locals serenaded the girls. We really got such a warm welcome everywhere we went,”

Meanwhile, the outgoing Laois Rose, Niamh Bracken has been making the most of her final few weeks as the 2012 Rose.

Niamh marched in the New York St Patrick’s Day parade and is currently volunteering in a Children’s Mental Institution in Belarus. Along with the 2012 Rose of Tralee winner, the roses and escorts will spend their time working with the abandoned and orphaned children in Vesnova.