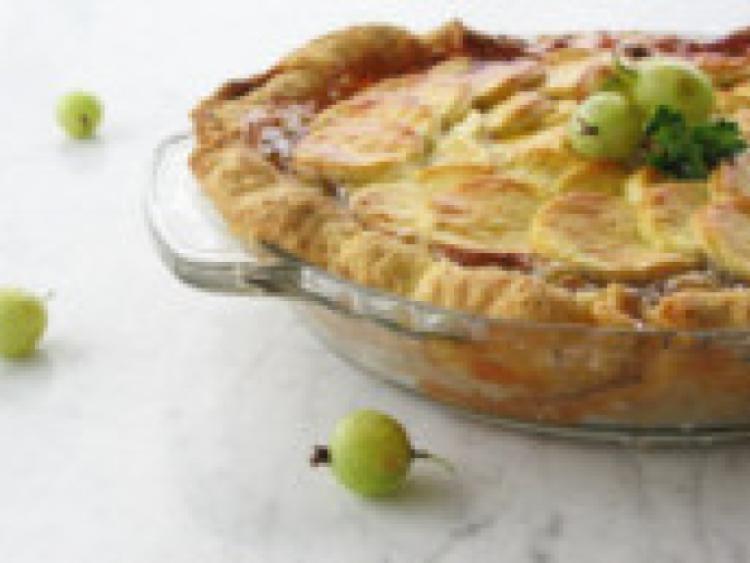 THE gooseberries will soon be making an appearance and as soon as I see them I want to make something with them. The obvious thing I suppose is a tart or a pie ( a tart has pastry on top and bottom, a pie just has a crust on top), also at this time of the year the roadside will be white with the beautiful flowers from the elder tree.

THE gooseberries will soon be making an appearance and as soon as I see them I want to make something with them. The obvious thing I suppose is a tart or a pie ( a tart has pastry on top and bottom, a pie just has a crust on top), also at this time of the year the roadside will be white with the beautiful flowers from the elder tree.

2 Egg Yolks mixed with about 2tbsp Milk or Water

To make the pastry place the butter and sugar in a bowl and give a good stir, then add in the egg yolk mixture followed by the flour and mix it all together, you might have to work more water or milk in if it’s too dry or some flour if you have wet it too much.

With your hand dipped in flour shape it into a ball wrap in cling film or greaseproof paper and place in the fridge for an hour.

To make the filling place the gooseberries along with the sugar into a saucepan, bring up to a boil and simmer for 10 minutes until the fruit is soft. Taste and see if it needs more sugar, add in the elderflower cordial or fresh chopped flower which ever you are using. Transfer the fruit to a deep pie dish about 10” round and at least 3” deep, leave to one side.

Heat the oven to about 180° or what ever temperature you would normally cook a tart at. Roll out the pastry on a floured surface so it’s bigger than the pie dish, I normally put a strip of pastry all around the edge of the pie dish then I moisten it and place the lid of pastry on top.

Prick with a fork, make a little hole in the middle of the pastry to let off steam, brush with some beaten egg or milk, if you have any pastry trimmings left over make some decorations for the top. Bake for about 30 minutes until nice and brown. Serve with custard or cream.

2tbsp Chopped Fresh Oregano or a mix of Basil & Oregano

Fry the onion in a large pan until soft then add in the aubergine and courgette and get lightly coloured, add in the garlic and canned tomatoes along with half of the oregano, season with salt & pepper. Bring to a boil and add in the cherry tomatoes with the chickpeas, cook for about 5 minutes, spoon all of the contents of the pan into a baking dish or Pyrex dish that’s suitable to put in the oven.

Cut about 6 slices from a white baguette or French stick and place on top of the chickpeas, mix the remaining oregano and parmesan cheese together and sprinkle over the bread. Place the dish in a preheated oven at 180° and bake for 15 – 20 minutes until crisp and golden. Serve with a salad on the side.