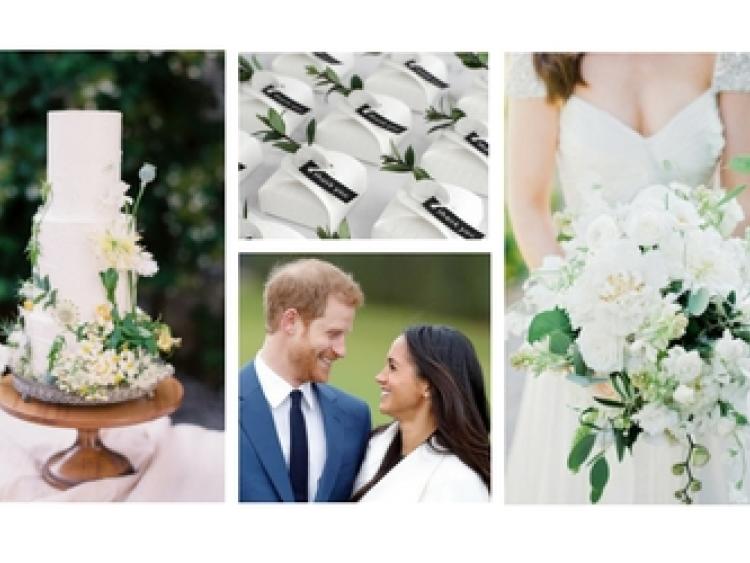 Online wedding experts at OneFabDay.com are seeing trends from Prince Harry and Meghan Markle’s Royal Wedding reflected in Irish weddings, and they haven’t even tied the knot yet!

1. The Cake
Meghan and Harry's Lemon and Elderflower Wedding Cake with Buttercream Icing will inspire lots of copycats, both in terms of the flavour and the decoration - the couple are having fresh flowers on their cake, which is extremely rustic and minimal by royal wedding standards.

2. The Flowers
We know that St. George's Chapel will be decorated using branches of beech, birch and hornbeam, and white garden roses, peonies and foxgloves. Roses and peonies are already very popular, but foxgloves are relatively rare in wedding arrangements and are about to get a huge upsurge in demand.

3. The Speeches
It's highly likely that Meghan Markle will bring the American tradition of the bride giving a speech to the UK for her own wedding, especially as she has so much experience as an actress and public speaker. We are seeing more and more Irish brides giving speeches at their own wedding these days, and we're expecting this to really soar in 2019.

4. Gifts and Favours
Given Meghan and Harry's charity work, it's almost certain that they will ask for charitable donations instead of gifts, and that they will give charitable donations to their guests instead of wedding favours. Irish couples are especially generous and were early adopters of this trend, but we’re about to see this one really take off!

5. The Engagement Ring
Harry's ring, which he designed himself and incorporates a diamond from Botswana, where the couple went on their first trip, and two diamonds from his late mother, Princess Diana's own collection, set many a heart aflutter, because of its beauty but also because of the thought and effort that went into it. We're expecting to see a lot more custom-made engagement rings and heirloom rings reworked to a modern design.

One Fab Day’s editorial team, who publish real wedding photography from Irish and international weddings, say they have witnessed a notable spike in Irish brides giving wedding speeches, spurred on by Meghan and Harry fever.

The Deputy Editor is Celina Murphy.

“A lot of the royal wedding trends will take six to 18 months to start appearing in real weddings” Celina says, “but the ones that relate to later-stage decisions like speeches and wedding favours are already popping up. We’ve definitely seen a lot more Irish brides giving a speech and we think rumours about Meghan’s speech must have given them the extra push.

"This will be the first royal wedding that will have a massive, measurable effect on all aspects of Irish weddings.

"Kate Middleton and Prince William's influence was really limited to Kate's style - her Sarah Burton for Alexander McQueen dress and the fact that the wore a second dress for the evening reception.

"With Harry and Meghan, we already have confirmation on so many small details, like the flavour of the wedding cake, and the specific flowers that will be used to decorate the ceremony space at St. George's Chapel, so couples don't have to wait until May 19th to steal these ideas."

One Fab Day’s research shows that readers are not just interested in finding out what Meghan and Harry have got planned for their big day, but how they can do the same.

“The impression that we’re getting from readers is that they really want to know how to recreate the look and feel of Meghan and Harry’s day, how to get their wedding cake, and how to decorate their reception space like theirs.”

"Every couple likes to think that their wedding is unique, and of course, it is, but the reality is that trends adopted by suppliers and retailers do come from somewhere, and one of those places is high-profile weddings like Meghan and Harry's."