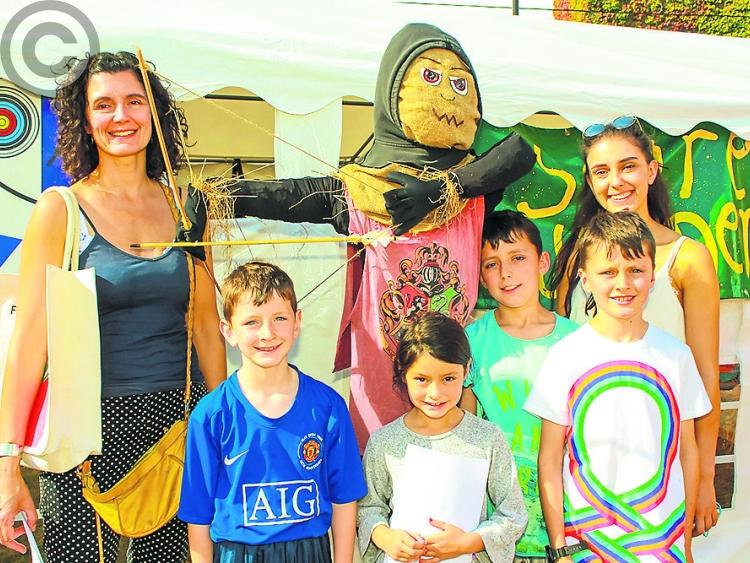 The Bennett family and Archer the Scarecrow. Pic by Tom Cullen.

History was made at the 9th Durrow Scarecrow Festival at the weekend when joint winners of the All Ireland Scarecrow Championship were crowned.

For the first time ever there was Joint Overall Winners with the top prize shared between “Scarecrow Electric Picnic” by Durrow Men Most Actively Seeking Retirement and “The Pope Mobile” by the Conahy Vintage Club.

For the first time ever, two overall winners came out on top from numerous brilliant entries from all over Ireland that made up the unique Scarecrow Village in Durrow. 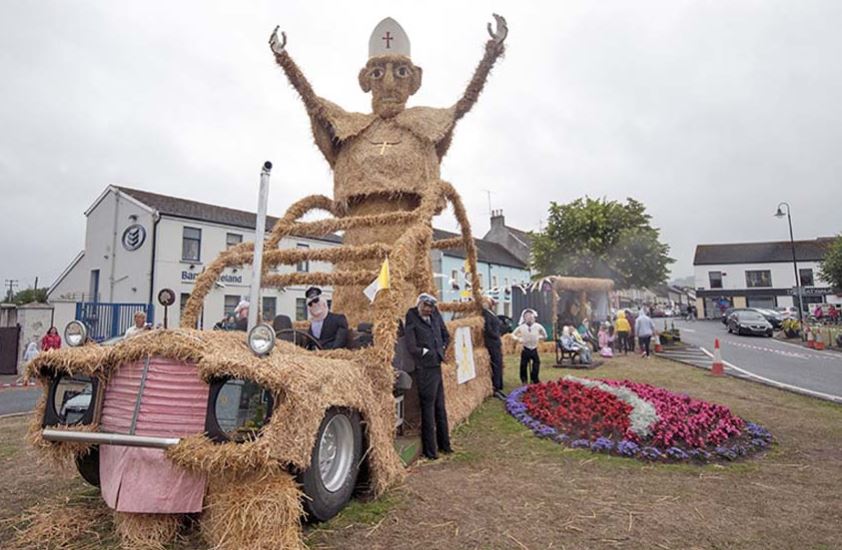 There was brilliant music and entertainment in Durrow over the last week with people kicking back in the Electric Picnic campsite or getting the perfect picture of the Popemobile.

There were some brilliant entries this year as the festival goes from strength to strength.

Walking around Durrow over the last week involved bumping into well-known characters like Peter Rabbit, Ryan Tubridy, Spiderman, Harry Potter, The Young Offenders and many more.

Conahy Vintage Club has kept up its winning streak with the festival after winning for the last three years with a dinosaur, a lion and king kong entry building the club's reputation for extraordinary creations.

This year, 23 members of the vintage club including children and young people, based around Ballyragget, worked around the clock to produce the scarecrow masterpiece version of the Pope.

Chairperson of the Conahy Vintage Club, Michael Bergin, said the club enjoys the camaraderie of the brilliant festival more than anything.

“We always think that big is beautiful! People have been very dedicated and come from all over to get involved.

“Many of our members are farmers and farming can be lonely so it is a bit of fun. We wonder how we can beat last year’s entry and we are already thinking of next year," he said.

The fantastic joint winners Durrow Men Most Actively Seeking Retirement did their village proud and impressed the judges and thousands of people who visited Durrow for the festival.

PICTURES: Some of the brilliant Durrow Scarecrow Festival creations!

See all the winners from the All Ireland Scarecrow competition below.

1st – “Scary Art” by Marie Moylan
2nd – “The Handmaids Bale” by Ann Lanigan and Theresa Delaney
3rd – “I Really Don’t Care. Do You? by Declan and Stephanie Phelan

1st – “When I Grow Up” by Happy Days Creche
2nd – “Not Another Stampy!” by Padraic and Naoise Buckley
3rd – “Cat in a Straw Hat” by Siona Lalor

The Judges Choice
(in no particular order)