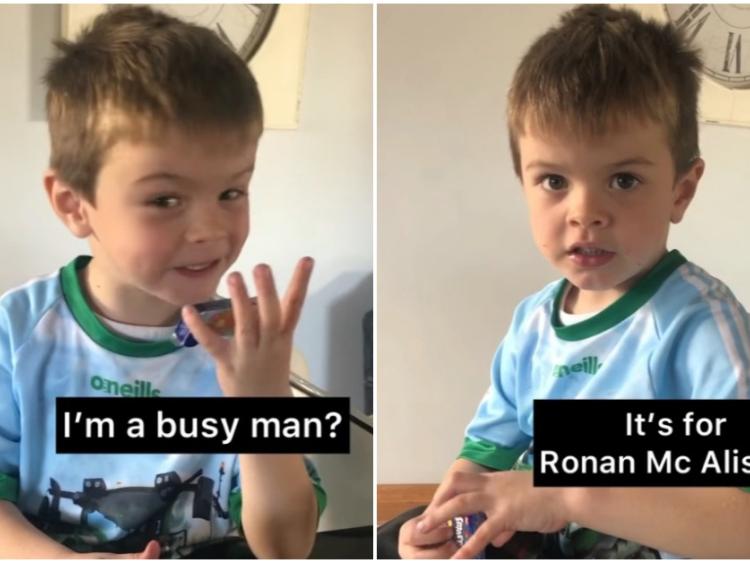 Those of us not living under a rock will remember last month's viral clip of 4-year-old Tyrone farmer Darragh O'Neill's exhausting to-do list which included strimming hedges, buying a digger and installing windows at Marks and Spencer.

The three-minute clip, uploaded by Darragh's mother Caroline, has been viewed millions of times across the world with people in awe of his long list of jobs that he has to squeeze in before bedtime at 8.30pm.

From putting up barbed wire to going up to John Paul's to "dig out his wee drains", collecting his new car, cutting sheep and strimming hedges, it's certainly hard to argue against his claims of being 'a busy man'.

Viewers were left with an overbearing question though: Who is the mysterious Ronan McAliskey?

We're told McAliskey, referenced throughout the video by Darragh, "drives the lorries", but that wasn't sufficient information for the hordes of viewers.

Darragh's mother Caroline clarified in the days after that THE Ronan McAliskey mentioned by her son is in fact real and delivers supplies to her husband, before going on to reveal that he has been inundated with phone calls and is loving 'the craic'.

Thanks to an update posted to Caroline's Facebook Page 'Digg Mama', we now have photographic evidence of Darragh and McAliskey 'doing a deal' for 'a Forklift he’s looking to buy'.

Darragh is quite the busy man, indeed.