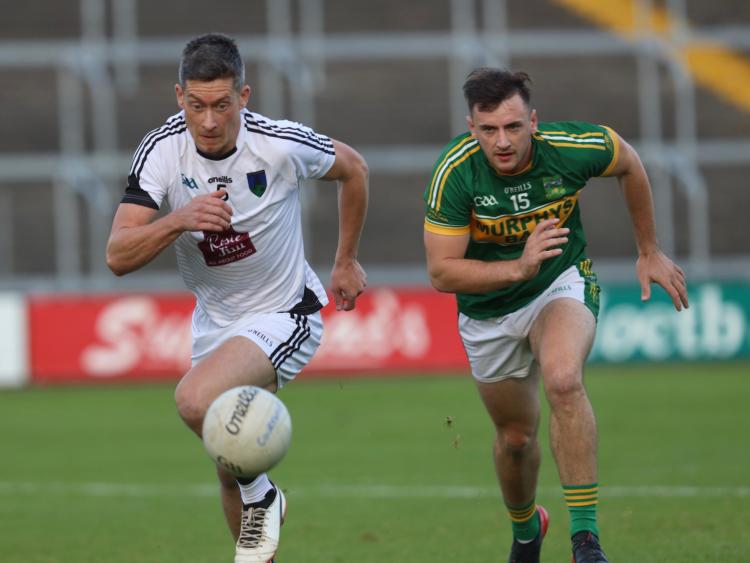 Action from the Laois SFC Round 3 clash between Ballylinan and Courtwood. Photo: Alf Harvey

In one of the most entertaining games of the Championship thus far, Ballylinan came back from eight points down at one stage in the first half to edge Courtwood by the minimum after a dramatic final quarter of an hour in O'Moore Park tonight.

Courtwood took the reigns from here as they held Ballylinan scoreless for the next 18 minutes, while scoring 1-6 themselves.

Niall Dunne kicked three points in-a-row for the men in white, two from play with a free sandwiched inbetween, before Niall Donoher landed a beauty with the outside of his left boot.

The first goal of the day arrived 20 minutes in when Alan Kinsella squared the ball to Sean O'Flynn to fist to the net. Niall Dunne's fourth of the half completed their blitz as they held a commanding 1-6 to 0-1 lead with eight minutes remaining in the opening half.

Ballylinan came to life in the final minutes of the half to kick four points, three from Gary Walsh, to see them narrow the gap to five points going in at the break - 1-7 to 0-5.

Ballylinan emerged for the second-half and kicked the opening two points of the half through Walsh and substitute Larry Kealy before Courtwood bit back through Niall Donoher.

Ballylinan got in for a goal of their own a minute later, Ciaran Farrell and Oisin Leonard combining to see the latter lift a green flag and bring them to within a point of Courtwood.

Courtwood increased their lead to two points with a Niall Dunne free, but Ballylinan kicked the next three, a brace from Ciaran Farrell and a single from Walsh, to storm into the lead.

Another Niall Dunne free brought Courtwood back level, but Ballylinan three more in quick-succession all from the boot of Gary Walsh to once again take the lead.

Courtwood were given a lifeline when substitute David Duffy got a stunning flick on Alan Kinsella's ball into the square to bring them back on level terms with two minutes of normal time remaining.

Instantly, Gary Walsh edged Ballylinan back ahead with a superb point but Alan Kinsella curled over the equaliser on the stroke of full-time.

There was to be one final twist as Gary Walsh kicked his eleventh point of the day in the first minute of injury-time as Ballylinan held out for a deserved victory.