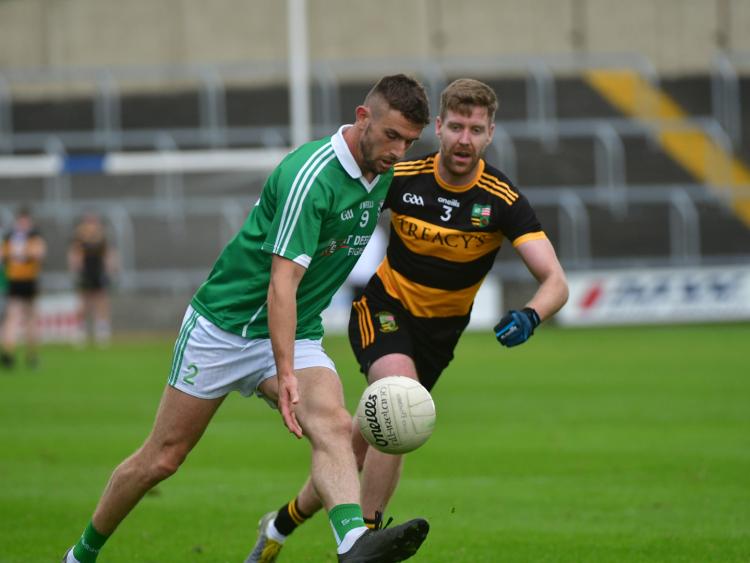 Action from the Laois SFC relegation semi-final between Stradbally and The Heath at O'Moore Park. Photo: Denis Byrne

Stradbally retained their status in the Laois SFC for another year, as they edged out local rivals The Heath in O’Moore Park on Sunday afternoon.

The Heath set the early pace, thanks to a brace of frees from Chris Bergin which saw them lead 0-2 to no score after three minutes.

Stradbally’s comeback was lead by Jack Deegan, whose charging run forward ended with a well-taken point. Jody Dillon then levelled it up with a free, but a good move from The Heath saw them re-take the lead with a good score from Daithi Carroll.

Chris Bergin quickly doubled the lead with a long-range effort from play, and then Daithi Carroll got his second with a drilled effort off the outside of his left foot.

Stradbally hadn’t really hit their stride yet, but they finally got a bit of rhythm to their play after that when Jody Dillon notched a couple of points to bring their supporters to life. A poor kickout from Joseph Walshe then allowed Stradbally to counter and Dillon added another, this time from play, to see the scores level again.

Chris Bergin and Justin Lalor then traded points, Bergin’s from a free, before the pace of the game began to pick up before the interval. The Heath had the first real sight at goal in the 24th minute when Andrew Booth was played in behind the Stradbally defence from a quickly taken free, but his left-footed shot whistled past the post.

The Heath soon took the lead again, as brilliant tackling from James Phelan dispossessed Liam Knowles 55 yards out, and the ball was quickly worked to Daithi Carroll who hit his third of the half, all from play.

The lead lasted less than a minute though, as Stradbally struck for goal moments later. A long ball forward to Benny Lawlor saw him win the ball and slip away from Gary Roe Smith all in one fluid motion, and he steadied himself before hitting a precise shot into the bottom corner.

The Heath responded with a goal chance of their own, but Evin Keane’s shot was batted away by Wayne Comerford. Stradbally were in the ascendency now and were presented with a glorious goal chance before half-time. Darren Maher was deemed to have been fouled in the area, and referee Clifford Ward pointed to the spot.

Jody Dillon stepped up to take it, but his shot went too high and flew over the bar, meaning Stradbally had to settle for a point, when a goal could have all but finished the game as a contest. That saw Stradbally lead 1-7 to 0-7 at half time.

Evin Keane opened the scoring for the second half after just 17 seconds, but Stradbally eventually cancelled that out with a point from a Tom Shiel free. Both Andrew Booth and Shiel then pointed in the sixth minute of the half after two good sweeping moves forward, with Chris Bergin then narrowing the gap to two with another free.

Jody Dillon then made it a three point game once more with a free, before the teams swapped points for the fourth time in the half, through Ciaran Booth and Tom Shield (free). That meant there was still a goal separating the teams heading into the last ten minutes.

Stradbally finally broke the back-and-forth nature of the scoring when Shiel got his fourth of the half, another free, and that saw Stradbally open up their biggest lead of the game at four points, with just seven minutes left.

Stradbally hit a point in the final minute of normal time open up a five point gap ahead of six minutes of added time.

The Heath managed to get back within four thanks to a point from Dylan Kavanagh, who rounded off a good move, but they would get no closer than that. Stradbally used all their experience to hold possession and wind the clock down, and they capped off the win with a late free from Jody Dillon.