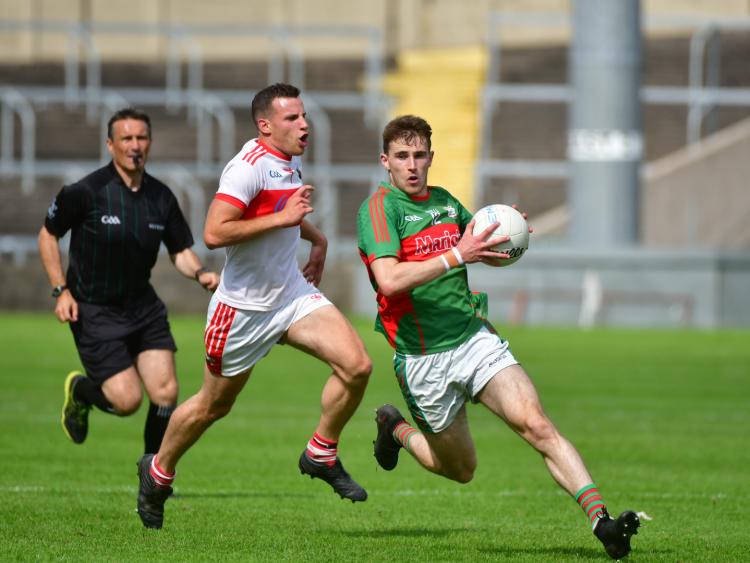 Action from the Laois SFC Round 3 clash between Emo and Graiguecullen at O'Moore Park. Photo: Denis Byrne

Graiguecullen are through to the quarter-finals of the Laois SFC after a hard-fought win over Emo in O’Moore Park on Sunday.

There was rarely more than a single score between the teams throughout this game, and both enjoyed spells in the lead, but Graiguecullen hit a scoring spell in the final 15 minutes to eventually claim the win.

Emo wasted little time in opening the scoring though, as midfielder James Hilliard dropped a shot just over the bar with a little under 20 seconds on the clock. Darren Strong then stroked over a close-range free to double their advantage before Paul Lawlor sent them three clear with seven minutes on the clock.

Graiguecullen took a while to settle into the game, but full-forward Jamie Parr got them up and running with a close-range free in the ninth minute. That was the spark they needed, and they quickly took control of the game.

Mark Timmons, lining out in midfield, kicked two points in three minutes, the second coming after great work from Aaron Forbes to set him up.

They had their first sight of goal after that when Ross Hennessy cleverly used his first to direct a ball across the penalty are towards goal, only to see it hit the post and deflect to safety. Graigue didn’t have to wait long for a goal though, and they raised the first green flag of the day four minutes later.

Mark Timmons did most of the legwork, as he stormed through on goal and unleashed a powerful shot with his left foot. Nigel Gorman did well to save it, but the ball rebounded to Ross Hennessy and his shot found the back of the net despite the best efforts of a scrambling Emo defence.

To Emo’s credit, they never panicked and slowly but surely drew level. Padraig Kirwan fisted over from close range before Paul Lawlor (free) and Darren Strong got them back on an even keel. Graigue got their noses back in front with a brace of frees from Jamie Parr, but Emo were soon ahead once more.

A brilliant ball over the top from Finbarr Crowley found Stephen Norton, and his powerful, low drive left Danny Bolger with no chance. Darren Strong hit a ’45 soon after, but the final score of the half went to Griague’s Brian Byrne. His point from 14 yards out left Emo ahead by just a single point at the break, 1-7 to 1-6.

That advantage lasted less than a minute on the restart, Jamie Parr’s fourth free of the game drawing Graigue level, before they went ahead with a nice point from Ross Hennessy.

Jack Owens replied for Emo when ha palmed the ball over the bar from close range, but scores were harder to come by in the early stages of the second half, and those three were the only ones registered in the opening ten minutes.

Doogue then tapped over another free to leave Emo needing two scores to at least draw, and Darren Strong got the first of those from a free. However, the goal they needed never came thanks to some solid Graiguecullen defending.

Danny Bolger landed a superb free from the left wing and then with the last kick of the game, he denied Paul Lawlor from close range to seal a three point win for his side.