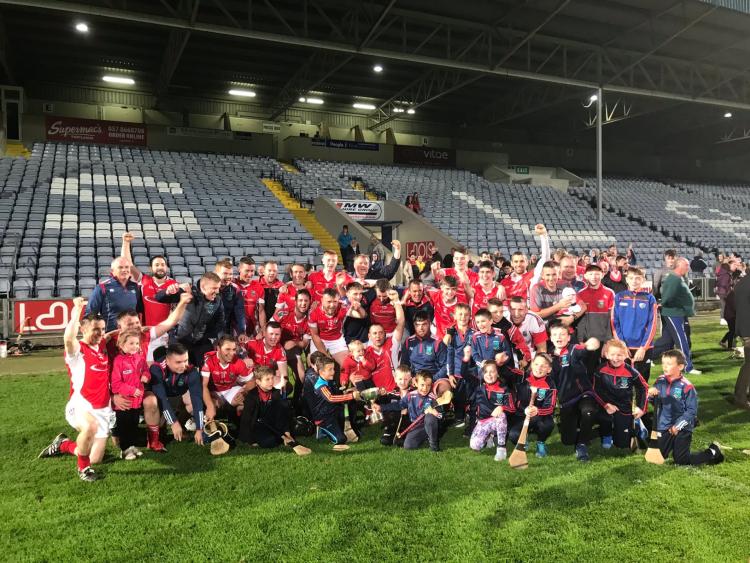 Mountrath collected the Junior 'B' title in O'Moore Park tonight with a deserved seven point win over Camross in the decider, Brandon Russell finishing with an 11 point haul for the winners.

Mountrath started the better of the two sides, going two points up in the initial minutes through Luke Cusack and Killian Kirwan scores to set the tone for the game ahead.

Camross opened their account with a Dan Delaney free seven minutes in to set the ball rolling. Mountrath went on to hit the next two, both Brandon Russell free from almost identical positions, to extend their lead to three points.

James O'Keefe and Dan Delaney traded points with Michael Meade and Brandon Russell at the midpoint of the half as three points still separated the sides.

Robert Delaney and Niall Bennett raised white flags for Camross, but Russell was on hand to nail another brace of frees as Mountrath kept three points in front.

Luke Cusack sent over a sideline cut from under the stand for Mountrath five minutes before half-time, but Camross closed out the half strongly with Dan Delaney rifling three frees to cut the gap to a single point going in at the break - 0-9 to 0-8.

Aided by the wind in the second-half, Mountrath dominated the proceedings as they held Camross to just four points while hitting twelves themselves.

Mountrath were awarded a penalty 37 minutes in when Peter Rice was fouled in the square, although Niall Cuddy was equal to Brandon Russell's attempt from the penalty spot as he turned away the shot.

James Doran blazed over a free in the first minute on injury-time, but the last score of the game fittingly went to Brandon Russell for his eleventh point of the game as Mountrath were crowned champions.