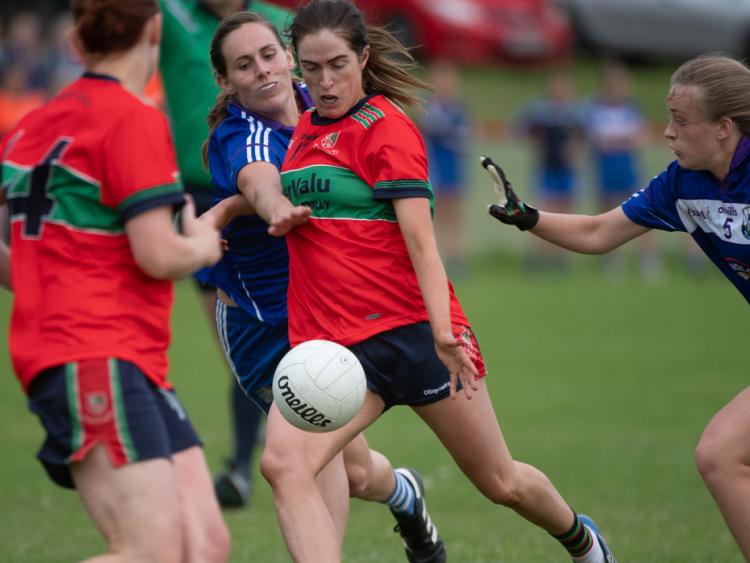 The rising up-and-comers St Conleth’s looked destined for a county final spot after their heroic victory in the league final over Sarsfields earlier in the season, but they were stopped firmly in their tracks by Timahoe thanks to the exploits of one Mo Nerney.

Nerney struck her first score of the game within minutes, as she launched one over from play. St Conleth’s corner-forward Niamh Cullen replied through a free, but Timahoe appeared the hungrier side early doors.

Wing-forward Orla Hennessy, who worked herself into the ground, kicked Timahoe’s second score, and Nerney fired over their third as Timahoe went into an early lead.

That advantage didn’t last long though, as St Conleth’s midfielder Aoife Kirrane sent one between the sticks. There was a period of play after that where both teams were culpable for some sloppy decision-making, but St Conleth’s did hit the front when Marie Byrne fired 1-1 without reply.

Byrne pointed a free, before direct running from Shiafra Havill resulted in Byrne going in on goals, and she planted the ball into the roof of Timahoe’s net.

However, Timahoe responded in devastating fashion by raising a green flag down the other end. Sarah Larkin just got to the ball before St Conleth’s keeper Clare O’Connell, and that allowed Larkin space to tap into an empty net.

Nerney placed over a free, and then she struck for the first of her three goals on the evening. Hennessy was again pulling the strings, as she found Nerney, and there’s usually only one outcome when the Timahoe forward gets a sniff at goals.

Strong running from St Conleth’s centre-forward Eva Galvin resulted in a straightforward score for Sinead Cullen, but Nerney was proving unstoppable up front, as she scored her second goal.

Alice Dunne set her up, and from quite a distance out, Nerney drove the ball into the corner of the net.

Jenny Murphy got her name on the scoresheet for Timahoe, but St Conleth’s kicked the last score of the half through Marie Byrne, as they trailed 1-5 to 3-5.

Timahoe began the second-half brightly. Sarah Larkin showing her ability to find the target by firing one between the posts, and Orla Hennessy dissected the posts as well with an outstanding outside of the boot effort.

St Conleth’s stemmed the tide though, as their full-forward Shiafra Havill ghosted through on goals and struck a low and powerful strike into the Timahoe goals.

Marie Byrne closed the gap to just four points for St Conleth’s, but the more experienced heads of Timahoe took over again.

Nerney rounded her marker once more, and unleashed another unstoppable shot into the back of the St Conleth’s net to bring the margin back to seven points.

Things got a little cagey for the rest of the contest, with referee Michael Tarpey brandishing several yellow cards. Nerney fired over her last score from play, but St Conleth’s were handed a lifeline shortly after.

A hopeful ball from corner-back Naoimi Luttrell was sent into the Timahoe square, but substitute Sarah Walsh managed to get a hand to it to flick it into the net.

However, St Conleth’s still required more goals, and none would come. Nerney fittingly ended the match with a point from a free, as Timahoe get set for another crack at Sarsfields in the county final.