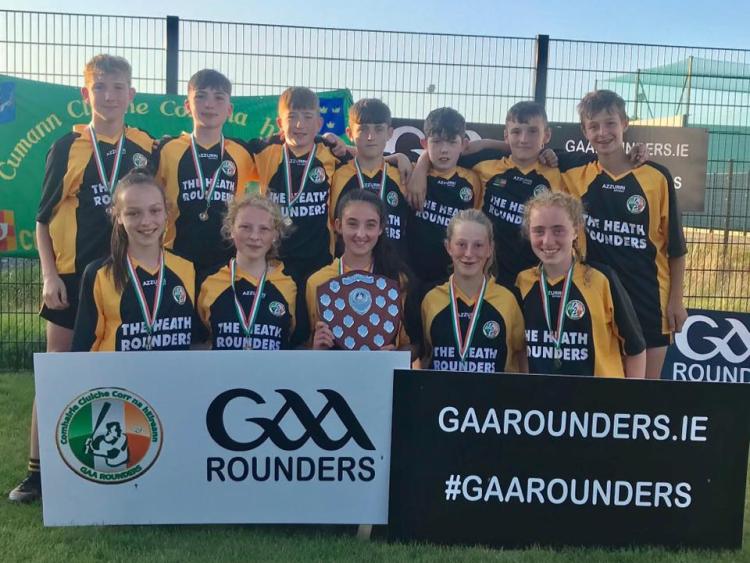 The Heath U-14 mixed team travelled to University of Limerick last weekend in search of adding a second All-Ireland title this summer having won the Feile na nGael title back in June.

The Heath team put in a near perfect display of rounders remaining unbeaten all day and were crowned as All-Ireland champions for the second time this year.

The Heath couldn't have gotten off to a tougher start after being drawn against local rivals Emo, who were the reigning Mixed champions after winning it in impressive style last year.

Emo got off to a good start, with The Heath starting slowly. Emo went ahead in the early stages of the game but that didn't faze The Heath. Good batting from PJ Larkin and Aaron Keane dragged The Heath back into the game.

The Heath closed out the game by beating the champions, and registered their first win of the day on a scoreline of 19-4.

The Heath's next match was against Ballybrown of Limerick which they won comfortably with Sarah Gorman starring as bowler as they booked their place in the quarter-final against Cuchulainn of Carlow.

The Heath produced a stunning display in the quarter-finals and the young Cuchulainn side couldn't live with The Heath. The Heath secured another win and progressed to the semi-final to play Breaffy of Mayo.

The Heath were now playing with a lot of confidence and blew Breaffy away in the semi-final. Breaffy had no answers to The Heath's batting as they ran out 30-7 winners.

They now faced Ballybrown again after playing their second team in the second game of the day. This game proved The Heath's biggest test of the day.

Ballybrown were looking like they were going to be crowned champions, leading 12-3 at one stage, but The Heath responded and produced a stunning comeback.

The Heath reduced the gap to two after the third innings with the score in favour of Ballybrown 15-13. The Heath then took control, the highlight of the innings was a huge homerun from Aiden Grace which left Ballybrown too much to do.

The Heath closed out the game winning on a scoreline of 36-16 to be crowned All-Ireland champions after a stunning day of rounders at the University of Limerick.