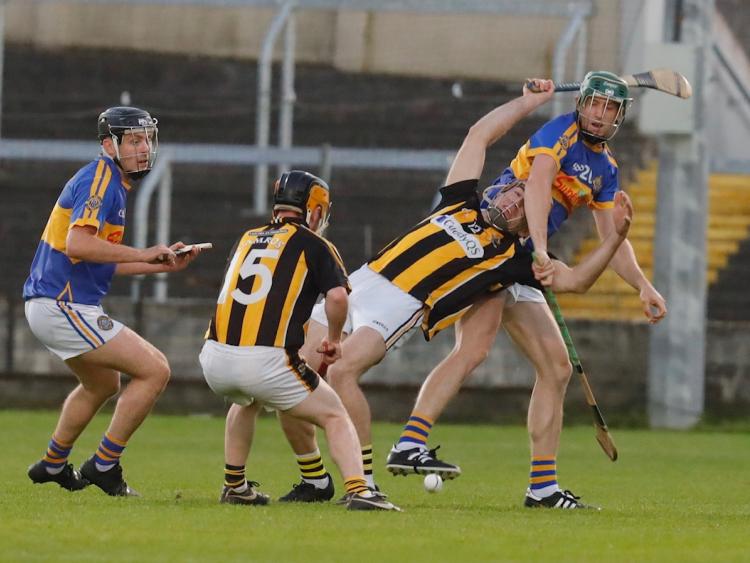 Action from the Laois SHC Round 3 game between Camross and Clough-Ballacolla on O'Moore Park on Saturday night. Photo: Alf Harvey

Clough-Ballacolla booked safe passage to the semi-finals of the Laois SHC with a well-deserved win over Camross in O’Moore Park on Saturday night.

A goal just before half-time from corner-forward Robbie Phelan proved to be a crucial score for the winners, as it left them in a commanding position at the interval. The comeback you’d usually expect from Camross never materialised, and Clough-Ballacolla were comfortable winners in the end.

Picky Maher got the scoring underway in the first minute from a free and Willie Hyland soon added to that with a brilliant score from the left wing. Camross replied with a long-range free from captain Gearoid Burke, but another free from Maher kept the Ballacolla lead at two.

Niall Holmes soon replied with a free of his own for Camross, and then Craig Carroll levelled the scores with their first point from play. That was as good as it got for Camross in the first half, as they struggled for any real fluency in the opening 30 minutes.

Willie Dunphy put Clough-Ballacolla back in front in the tenth minute, and two more frees from Picky Maher sent them into a free point lead. Willie Hyland then sent that out to four with a lovely point from the right wing, and Camross needed to find a response.

To their credit they duly did, but it wasn’t enough to fully close the gap. Mossy Burke and Darrell Dooley pointed within seconds of each other and Holmes landed another free to get them within one, but Clough-Ballacolla were soon out in front once more.

Willie Dunphy got his second point after a clever pass from Brian Corby, and then Picky got hit fifth free of the half. The Laois star then landed one from play 35 yards out, with Stephen Bergin showing a good turn of pace minutes later to win possession and point from the left corner.

Camross were struggling for a response and things soon got worse for them as Clough-Ballacolla got a goal. Robbie Phelan won possession on the left side of the penalty area and despite having two Camross defenders in close proximity, managed to get a shot away with flew past Thomas Dunphy and into the bottom corner.

Camross had to regroup quickly and did manage to get the final score of the half, through a free from Holmes, but they still trailed 1-11 to 0-7 at half time.

Camross needed a strong start to the second half and they duly delivered, starting with a point from Mossy Burke. Niall Holmes soon followed that with a couple of frees, and the reigning champions were now just four points in arrears.

With momentum slowly building behind them, Camross failed to drive it home and Clough-Ballacolla took the sting out of the game two frees from Picky Maher.

That was a key moment for Clough-Ballacolla as it put the back in the box seat, and Camross never really troubled them after that.