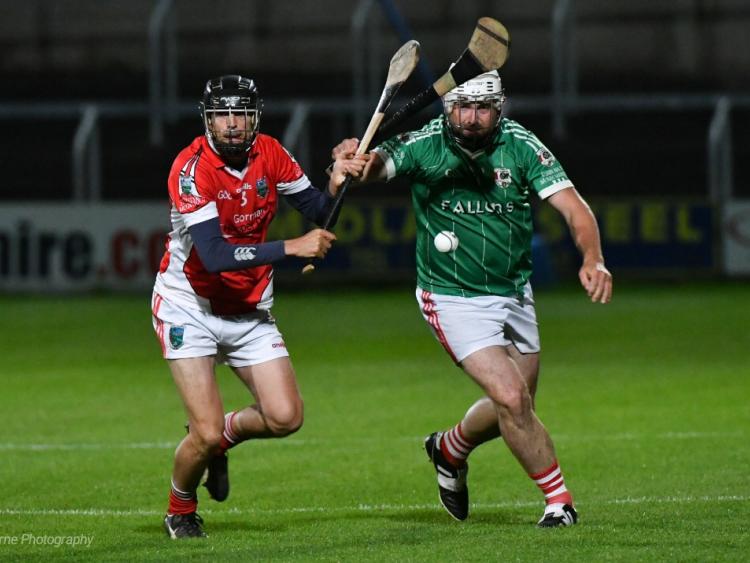 Clonaslee St Manman’s desperately required a victory in this clash to give them any chance of avoiding a relegation final this season, and despite putting up a brave fight, they fell short. St Fintan’s Mountrath can now look forward to the knockout stages of the competition  following their second victory.

Laois Senior ‘A’ Hurling Championship Round 3 Group A

St Fintan’s Mountrath got the scoreboard working in O’Moore Park through a Jimmy Hyland free, but Clonaslee St Manman’s took control of the contest for the next fifteen minutes.

Ger Reilly grabbed a quick 1-1 for himself, as he capitalised on a dangerous breaking ball in the St Fintan’s Mountrath square to rifle one into the back of the net.

Clonaslee St Manman’s midfielder and last season’s Laois U-20 vice captain Liam Senior was proving his accuracy from dead balls, as he split the posts once more from a 65’.

Jimmy Hyland (two), Colm Linehan and Mick Meade all raised white flags for St Fintan’s Mountrath to see them close the gap to the minimum.

St Fintan’s Mountrath almost had a goal as well, as the ball fell kindly to Gavin Sydes in acres of space, but his effort whistled wide of the posts.

Senior sent over the final score of the first half to leaver Clonaslee St Manman’s in front on a score of 1-6 to 0-7 at half-time.

However, St Fintan’s Mountrath were on the front foot as the second-half got underway.

Three points from placed balls from Hyland along with scores from Gavin Sydes and Colm Linehan sent St Fintan’s Mountrath into the lead for the first time.

Clonaslee St Manman’s, as if they weren’t in enough trouble, were reduced to fourteen men shortly after.

Glen McEvoy was involved in an off the ball incident, and that was the end of his night.

However, Clonaslee St Manman’s showed an abundance of character to keep them in the game. Scores from Tommy Tynan, Patrick Hyland and Senior (free) had them level despite being a man down.

Robert Downey then showed a serious turn of pace to pull away from his marker, and despite being against the wind and a sizeable distance out, Downey delivered a lovely score to put Clonaslee St Manman’s ahead again.

All Clonaslee St Manman’s could muster was a single Senior point from a free, and St Fintan’s Mountrath held on for the win.