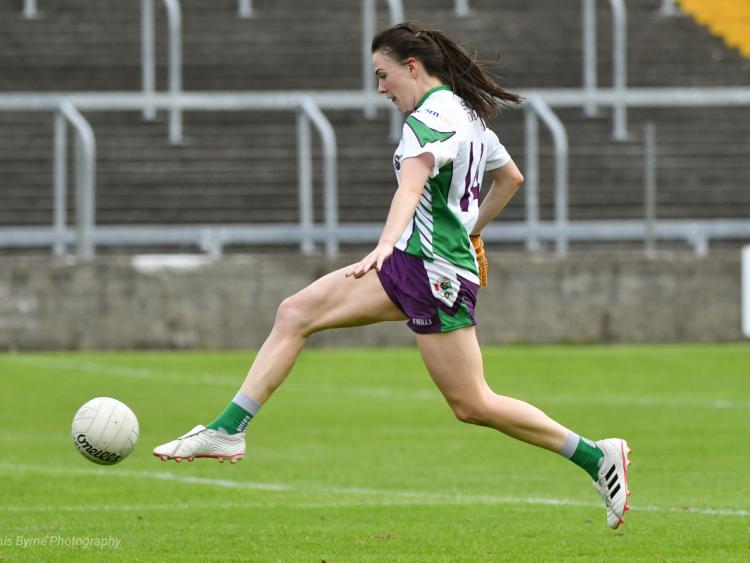 In the first of the double-header of Ladies finals in O'Moore Park on Saturday afternoon, Clonaslee St Manman's ran rampant in the second half to blow away a valiant Ballyfin effort in an 11 goal thriller.

Clonaslee St Manman's dominated the opening ten minutes of the game, racking up a ten point lead before Ballyfin would even open their account.

Hannah Russell set the game in motion with less than a minute played with a close-range free. Kate Conroy followed with a sweet effort off of her left, and then Russell sent over her second free of the game to give Clonaslee St Manman's an early three point lead.

Clonaslee compounded their lead after six minutes, referee Shauna Mackey pointing to the penalty spot for an infringement and Emily Corbett stepped up to calmly stroke the place kick into the bottom right corner.

Kate Conroy added her second point two minutes later, and then Clonaslee got in for their second goal. Hannah Russell offloaded the ball to Roisin Poole and she made no mistake with the finish to put them 2-4 to 0-0 ahead.

Ballyfin's third goal arrived on the 20 minute mark when Edel Finn wriggled her way through the Clonaslee defence to rattle the back of the net.

Clonaslee wasted no time getting back on track, Kate Conroy applying the finish to their third goal a minute later after their first shot was saved and their second rebounded off of the crossbar.

Odile Fitzpatrick kicked a brace of points for Ballyfin either side of Clonaslee's fourth and final goal of the half from the in-form Hannah Russell to leave the half-time score reading 4-4 to 3-2.

Clonaslee St Manman's returned to their dominating ways in the second half as they hit Ballyfin for 3-8, while holding Ballyfin to a 1-1 total in the closing half.

Of the six points Clonaslee hit in the 15 minutes after the restart, the excellent Hannah Russell accounted for five with Roisin Poole completing the six.

Odile Fitzpatrick led the frontline for Ballyfin and kicked their 1-1 in the closing half as Clonaslee found another gear.

Clonaslee finished with a flourish as they brought their goal tally to seven with Pauline Keating, Rose Dunne and Russell all hitting the back of the net as Clonaslee St Manman's ran out deserved victors in O'Moore Park.