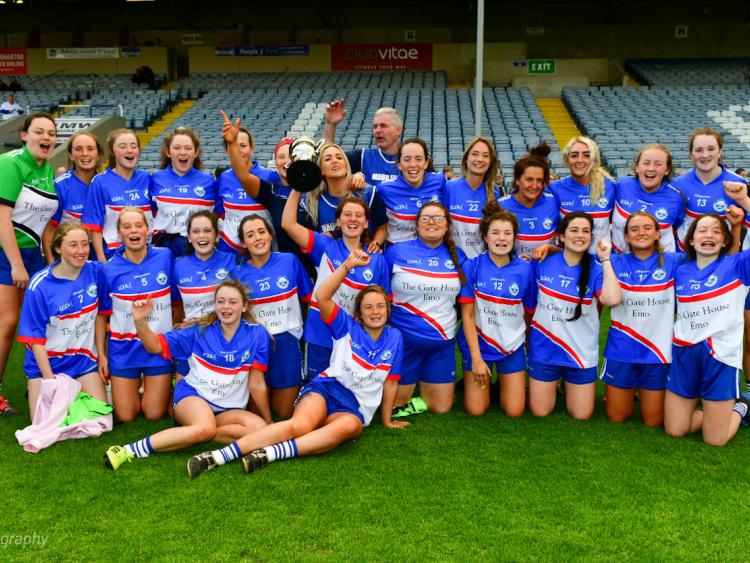 St Paul's made it back-to-back titles with today's thrilling victory over Ballyroan in the Intermediate decider at O'Moore Park in a game that featured 13 goals in total.

Straight from the throw-in Ballyroan worked the ball forward and went direct for goal, Eimear McWey's initial shot saved but Kate Whelan was on-hand to slot home the rebound and give Ballyroan a dream start to the final.

Unfazed by Ballyroan's perfect start, St Paul's wasted no time wiping the slate clean with Shannon Costello taking off on a superb solo run through the heart of the Ballyroan defence before unleashing a rocket into the roof of the net to level the sides at a goal apiece after three minutes.

Ballyroan went on to take the lead through points from Emily McWey and a Kate Whelan free, but St Paul's replied in devastating fashion to take the lead for the first time in the game. Emma Lawlor played it through to Gillian Keenan who rattled the Ballyroan net.

St Paul's fired their third goal of the half minutes later, this time Aoibhinn Maher providing the finish to push them four points clear.

Eimear McWey and and Emma Lawlor traded points towards the end of the half, but three more goals would arrive before the half time whistle. Emma Murphy and Lawlor rattled the Ballyroan net either side of Rachel Fitzgerald's goal for Ballyroan to send St Paul's in six points ahead on a scoreline of 5-1 to 2-4 after an exciting opening half.

St Paul's extended their lead almost instantly after the resumption with Ciara Crowley slotting their sixth goal of the contest inside the first minute.

Kate Whelan and Emma Murphy swapped points before St Paul's got in for yet another goal when Isabella O'Toole fired past Than Phelan in the Ballyroan goals. A brace of Kate Whelan frees was returned by Aoibhinn Maher, before Ballyroan began to stage a comeback.

Rachel Fitzgerald and Emily McWey combined to see the latter hit the back of the St Paul's net with a quarter of an hour to go. Two goals arrived for Ballyroan shortly after, with Kate Whelan finishing both. The first came from play after a well-worked move, and the second from the penalty spot after Emily McWey was fouled in the square to leave just two points between the sides with seven minutes of normal time remaining.

With the momentum falling in their favour Ballyroan went in search of a goal that wouldn't come, despite coming close to breaking down the St Paul's rearguard.

St Paul's put the result beyond all doubt in the final minutes, Shannon Costello lifting the thirteenth green flag of the day to see them claim the title.