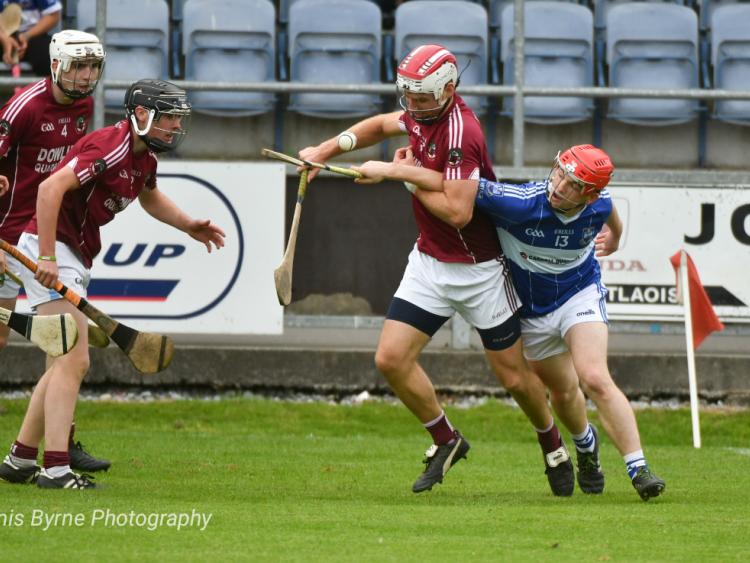 Action from the Laois SHC Round 3 clash between Ballinakill and Castletown at O'Moore Park. Photo: Denis Byrne

Castletown finished in second place in Group B following today's six-point victory over Ballinakill at O'Moore Park in Round 3 of the Laois Senior Hurling Championship.

Castletown took an early lead in this game with a brace of Dylan Conroy frees setting the scoring underway in O'Moore Park. Ballinakill's first came by way of an Eamon Jackman free to close the gap to a point with five minutes played.

Castletown continued to keep their noses in front with Conroy's third free inside the opening ten minutes, and a quick double of points from Aaron Gaughan - his first a beauty off the hurl - to give them a four point advantage.

Jackman briefly interrupted the Castletown scoring with his second of the contest, but Castletown went straight back on the offensive and struck four more before Ballinakill would gather some momentum. Conroy (2) and Ryan Mullaney scores putting them in a commanding position.

Ballinakill found their form in the final ten minutes of the half to rattle off six points through Jackman (2), Cha Dwyer (2), Eddie and Seamus Dwyer, as opposed to Castletown's five points from the hurls of Gearoid Gaughan (2), John Gaughan, Conor Phelan and Martin Phelan to leave the men in blue six points ahead at the break.

Ballinakill restarted the second-half well with Podge Lalor and Dan Bergin pointing either side of a Joe McCormack single, and then they reduced the deficit to three points with Eamon Jackman and Lir McDonald narrowing the arrears with a quarter of an hour left to play.

Castletown reinforced their lead a minute later when Aaron Gaughan managed to keep Ryan Mullaney's long free into the square in play, and when the ball broke to Gearoid Gaughan he let fly off the deck and rattled the the Ballinakill net in near Seamus Callanan-esque style.

While Ballinakill kept in reach with further points from Evan Dunne and Jackman, Castletown sprinted to to the final whistle with Conroy adding two from placed balls and Joe McCormack's second but there was to be another green flag before the end.

With a minute remaining in normal time Ballinakill were awarded a 21m free. Cha Dwyer stepped up and rifled his shot past the sea of Castletown defenders on the line to make it a six point game.

Castletown closed out the game with with late points from Conroy and substitute Shane Cuddy to see them finish second in the group and setup a quarter-final clash against Camross, while Ballinakill will meet Borris-Kilcotton.