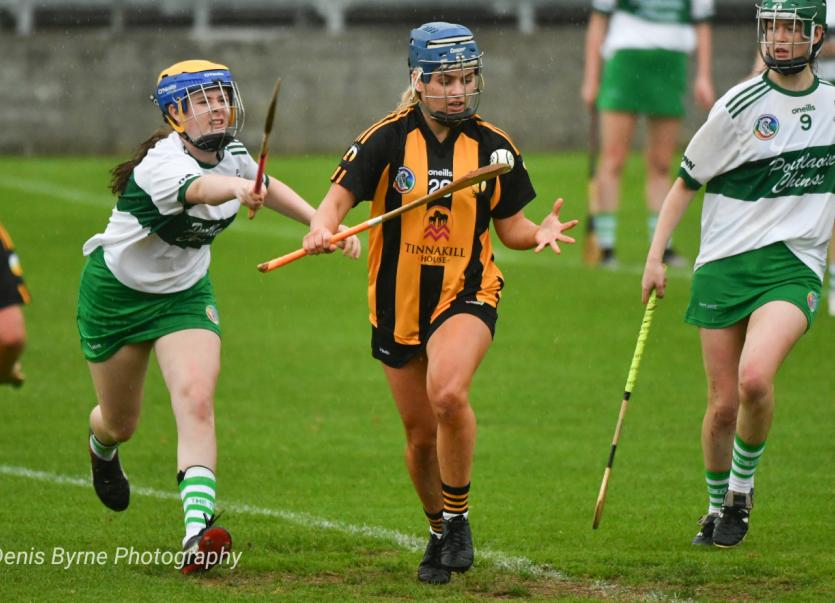 Camross were crowned Laois Camogie Junior champions following a hard-earned victory over Portlaoise in the decider played in horrible conditions at O'Moore Park this afternoon.

With thunder and lightning overhead as the ball was thrown-in, conditions did not improve over the course of the game with heavy rain showers following. Nevertheless, it took Camross just three minutes to set the scoreboard in motion.

Laura Drennan's '45 deceived everyone and dropped short into the back of the net to give the women in black and amber an ideal start to the game.

Portlaoise slowly came to terms with the conditions, and indeed the opposition, as they struck the next two points in quick succession through Rebecca Reddin and joint-captain Jane Ward to bring them within a point.

Camross reinforced their lead with their second goal shortly after, this time Aine Cuddy providing the well-taken finish. A Threrese Keenan point directly after increased the Camross lead to five points at the midpoint of the half.

With 20 minutes on the clock, Portlaoise grabbed their first goal of the day when Amy Byrne's free from range dropped into the back of the net to close the gap to two points.

Camross went on to strike for another two goals before half-time, Kira Bannon's arriving first after a clever flick over Portaoise goalkeeper Chloe Norton's head, and their fourth goal of the half arrived in the first minute of injury-time through Courtney Lally. In between their two goals, Portlaoise ahad a penalty after Rebecca Reddin was fouled in the square - but Amy Byrne's shot blazed over the crossbar.

Entering the dressing rooms at half-time, Camross led 4-1 to 1-3.

More rain fell over the half-time break making the playing conditions even more difficult. That said, both these sides played out a an entertaining half.

Amy Byrne restarted the scoring for the half with a free three minutes in, but Camross spurred on to hit goal number five shortly after with Courtney Lally playing Aine Cuddy through for her second of the game to put them nine points ahead.

Portlaoise staged a comeback in the final 20 minutes of the game. Erone Fitzpatrick gave them a crucial lifeline with 40 minutes on the clock when she sent a bullet past Aedin Lowry in the Camross goals, and not long after substitute Rachel Glynn struck for the eighth and final goal of the game.

Amy Byrne brought her tally to 1-3 for the day with a pointed free nine minutes from the end, leaving just two points separating the sides to set the stage for a nervous finish.

However, Camross steadied the ship with an Aoife Collier free as they held out for a deserved victory.