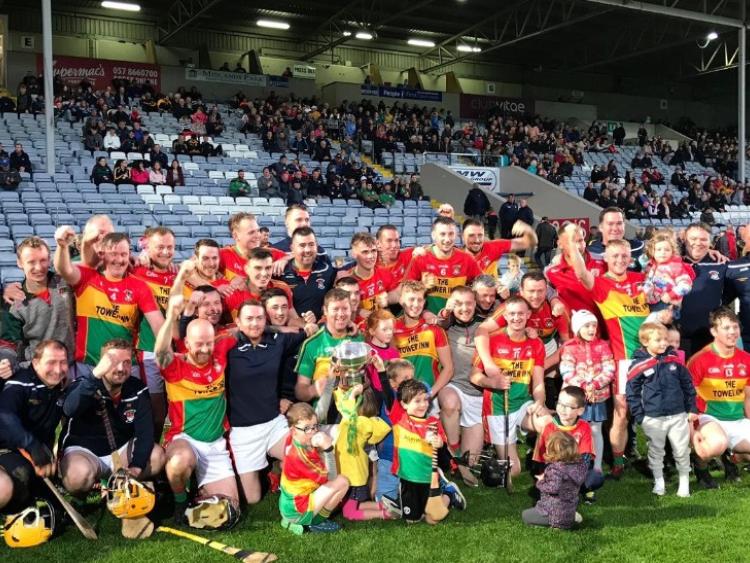 Park-Ratheniska/Timahoe finished the stronger to capture the Laois JHC title, the first in the club's short history, with a six point victory over The Harps in a six-goal cracker of a game.

With the rain from earlier in the day holding off, it was a well-contested opening half of hurling. The Harps registered the score of the day with a minute on the clock, Ross Young dissecting the posts to give them an early advantage. Park-Ratheniska/Timahoe returned fire the very next minute, Ruairi O'Connor wiping the slate clean.

The Harps took the lead in the third minute through a Young free, but Park-Ratheniska/Timahoe stormed ahead six minutes in when Ruairi O'Connor's shot dropped short and Sean Tynan pounced on the loose to send it to the back of the net.

The Harps got a foothold in the game thereafter, Ross Young's third point of the day closely followed by a goal of their own when Conor Deegan finished off a darting run with a clever bat past Ger Ramsbottom in the Park-Ratheniska/Timahoe goals. An Evan Deegan point extended their lead.

Robbie and Pa Foyle traded scores with Young and Liam Dunphy before Park-Ratheniska/Timahoe struck for their second goal of the half when Ruairi O'Connor's driven low shot found its way past Lorcan Fitzpatrick to level the sides with four minutes remaining before the break.

Points from Robbie Foyle and Ruairi O'Connor were returned by Niall Brophy, before the same man grabbed an important goal for The Harps in the second minute of injury-time with a rocket into the top corner. The sides went for the dressing rooms with The Harps leading by two points, 2-9 to 2-7.

Park-Ratheniska/Timahoe restarted the game well with Damien O'Connor landing a long range point four minutes into the half. Park-Ratheniska/Timahoe were awarded a penalty shortly after, but substitute Padraig Kelly's effort was excellently saved by Lorcan Fitzpatrick. A Robbie Foyle free brought them level with 41 minutes on the clock.

The Harps pulled ahead once again with a two points in as many minutes through Young (free) and Aaron O'Grady, but Park-Ratheniska/Timahoe replied with an important goal through Pa Foyle after a his harmless looking shot trickled past Lorcan Fitzpatrick and over the goal line.

Points followed for Park-Ratheniska/Timahoe through Ruairi O'Connor and the in-form Robbie Foyle to leave a goal between them heading into the final three minutes of normal time.

The Harps pulled one back through a Ross Young free on the 60 minute mark, but Park-Ratheniska/Timahoe galloped towards the finish line with Ruairi O'Connor getting in for his second goal followed by a late Robbie Foyle free to see them claim the first title in the club's short history.