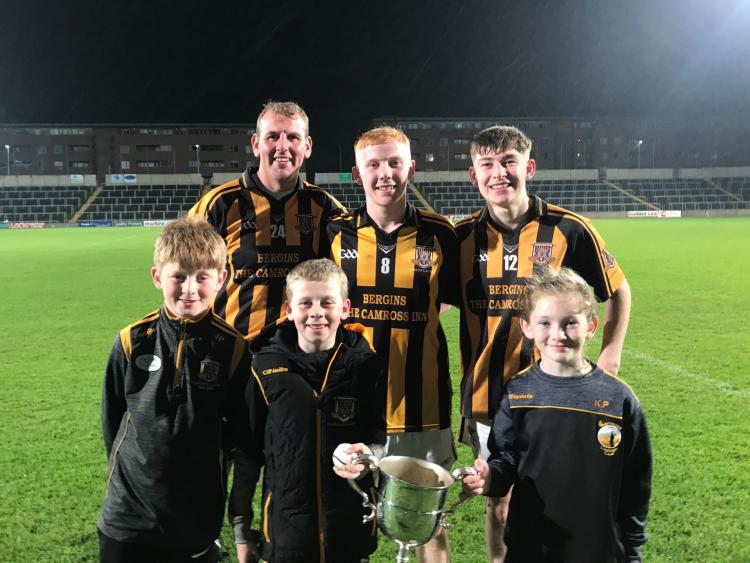 Following on from the success of their Camogie teams earlier in the day, Camross collected their third cup of the day on the steps of the stand in O'Moore Park tonight, this time the Laois Intermediate title following a comprehensive victory over Borris-Kilcotton.

Camross opened the scoring in the first minute, Kevin Lalor firing over the first of the day before Oisin Bennett hit their second to double their early lead.

Borris-Kilcotton got on the board with an Eoin Fitzpatrick point not long after, but Camross struck back through Matthew Collier to keep Camross ahead.

Borris-Kilcotton hit a purple patch just after the ten minute mark as they went on to hit four in-a-row DJ Kelly, Oisin Fleming and a brace of frees from Emmett Jones.

In typical Camross fashion, they went up the the other end and grabbed the opening goal of the game through Joe Ryan - ending their 11 minute drought.

The final ten minutes of the half saw seven points scored, Eoin Fitzpatrick accounting for all of Borris-Kilcotton's three while David Mortimer (2), Matthew Collier and Joe Ryan all lifted white flags to send Camross in two points ahead 1-7 to 0-8.

Camross dominated for large parts of the second-half as they proved to be far more clinical in front of the posts.

The half started at a fast pace with Jones firing over three frees for the Borris-Kilcotton cause, but so did Camross through Mortimer (2) and a long range Rob Tyrell point to keep them two points in front.

Camross took the game by the scruff of the neck from here, hitting 1-3 before their opposition would score again. David Mortimer was on hand to fire 1-1, while Joe Ryan and Oisin Bennett posted points.

Borris-Kilcotton briefly interrupted the Camross scoring with a Jones free, but Camross went back on the offensive and rattled off a further 1-4 with Oisin Bennett bagging the goal.