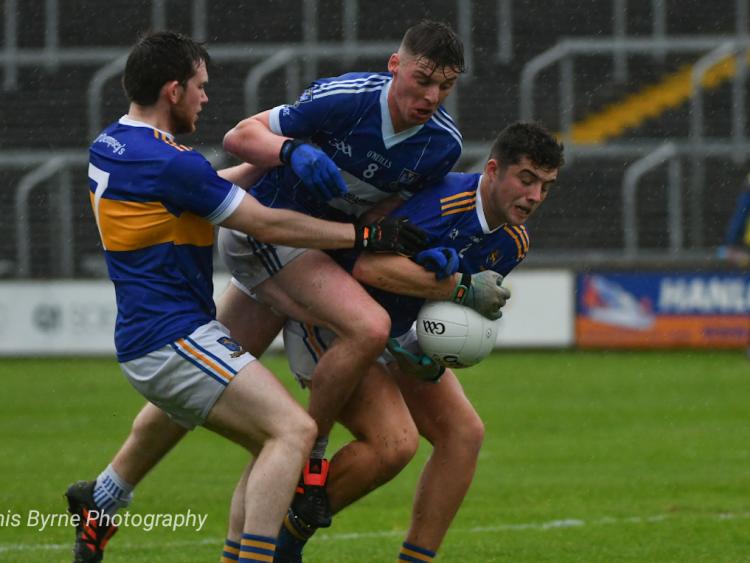 Played under a constant downpour in O'Moore Park, O'Dempsey's claimed the Laois Intermediate football crown with a narrow two-point victory over Castletown in the decider this evening.

With intermittent showers prior to throw-in, the rain only really began to fall heavily as the game started. Nevertheless, O'Dempsey's drew first blood with two minutes on the clock when Eoin Finlay sent over their first of the day from a free.

Finlay added his second shortly after, this time curling over off his left boot from play to double their lead. Castletown got off the mark not long after with Brendan Reddin slotting from just outside the D, but O'Dempsey's restored their two point cushion with Finlay's third of the half with ten minutes gone.

Castletown almost had a goal 13 minutes in, Chris McCormack on hand to clear Kevin Carroll's effort off the line. Their goal did arrive soon after, Martin Phelan's daring run rewarded with a sublime finish to the O'Dempsey's net to see them take the lead for the first time in the game.

It wasn't to last long though as less than a minute later O'Dempsey's went up the other end and lifted a green flag of their own when Mark McCormack managed to squeeze his shot past Castletown goalkeeper Shane Cuddy. Eoin Finlay followed up with a brace of points, the first from play and the second a free to extend their lead.

Castletown bounced back with Ryan Mullaney dinking over from the 21 before Conor Walsh added another for the cause.

O'Dempsey's hit back with their second goal three minutes before the break, Eoin Finlay offloading to Daithi Howling who fisted in over goalkeeper Shane Cuddy's head for a clever finish.

The final point of the half went Castletown's way with Aaron Gaughan splitting the posts to send them in trailing by four points, 2-5 to 1-4.

Castletown dominated for a quarter of an hour after the restart, kicking four points in-a-row to claw back level - despite the worsening weather conditions.

James Mullaney kicked the opening two points of the half, his first from play and the second a free, before his brother Ryan slotted two in quick succession to draw them back on level terms with fifteen minutes left to play.

O'Dempsey's steadied the ship with the next three points on offer going their way, Finlay converting two placed balls while substitute Stephen O'Leary added another to put them three points ahead with ten minutes remaining.

Castletown shot back with a Brendan Reddin point, but their ambitions were dented minutes later when O'Leary fisted Tom Behan's ball into the square to the back of the net.

Castletown were reduced to 14-men in the second minute of injury-time when Aaron Gaughan received his marching orders, but they still managed a late consolation goal when Martin Phelan stormed through before unleashing a rocket into the top corner.

That was to be as close as they would come as time caught up with their endeavours and O'Dempsey's claimed the Junior crown.