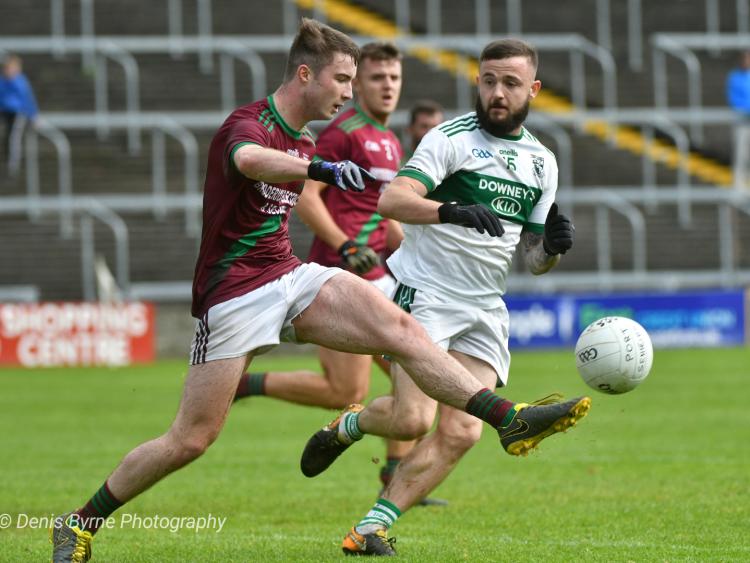 The three-in-row chasing reigning county champions Portlaoise are through to another final with a narrow victory over Portarlington in a cracking game at O'Moore Park this afternoon.

*Coverage brought to you in association with Portarlington Leisure Centre

From the throw-in Portarlington dominated the opening half, scoring a goal with less than a minute on the clock to set their intentions out for the game ahead.

Straight from the throw-in and with less than 50 seconds played, Portarlington worked the ball to Colm Murphy who in-turn passed to Jake Foster for the corner-forward to squeeze his shot inside the post to give them a dream start against the three-in-a-row chasing reigning champions.

Their good start continued with Jake Foster sending over a free less than a minute before Colm Murphy and Ronan Coffey combined to see the latter push the Portarlington lead out to five points after six minutes of play.

Portlaoise were slow to get going, but Portarlington were visibly the hungrier side. Portlaoise interrupted the Portarlington scoring 12 minutes in to open their own account, Brian Glynn feeding Gareth Dillon who duly split the uprights.

Undeterred, Portarlington set back about their business and hit the next three points in as many minutes through Foster, David and Colm Murphy to leave them seven points ahead with just over a quarter of an hour played.

Portlaoise pulled two points back in quick succession, both from Bruno McCormack. His first arrived from a tricky free from a tight angle, and his second from play after his blazed shot flew over the crossbar.

Portarlington hit two more in the final ten minutes of the half with David Murphy pointing from an acute angle and Colm Murphy a close range free, but Portlaoise kicked the final point of the half through Brian Glynn two minutes before the break to send them in trailing by six points and in unfamiliar territory.

Portlaoise were a much different side in the second half right from the get-go. Ciaran McEvoy fisted over the bar from Brian Glynn's skied effort two minutes in, before they grabbed their goal shortly after. Ricky Maher was fouled on his way to goal and Bruno McCormack stepped up to dispatch the penalty with the aid of the post.

With 36 minutes played, Bruno swung over another point to bring The Town to within one. Portarlington stemmed the Portlaoise revival, albeit temporarily, with a Colm Murphy free but Portlaoise set back about dismantling their lead.

Points from Ricky Maher and Benny Carroll (free) brought Portlaoise back onto level terms before Bruno McCormack landed an inspirational score to give them the lead for the first time. Ricky Maher followed up to double the Portlaoise lead with fifteen minutes to go.

Portarlington clawed back level by the 52nd minute thanks to a brace from Colm Murphy, and then the same man edged them into a one point lead three minutes before the end of normal time.

Portlaoise levelled again in the 59th minute with Bruno coming to their rescue once more.

Five minutes of additional time were signalled, but 13 were played. The additional time period proved to be full of sparks with four sendings off - three for Portarlington and one for Portlaoise as the game threatened to boil over.

In the 68th minute Portlaoise broke forward and Gareth Dillon slotted over from the left wing, and then in the 73rd minute Ronan McEvoy put them two up and they held out to keep their three-in-row on course.

*The Leinster Express is delighted to team up with Portarlington Leisure Centre, the only public access leisure centre in Laois and Offaly to have attained the top level of Outstanding in the New National Quality Standards for Leisure for 2019.

As part of supporting our coverage, Seán Quirke and the team at Portarlington Leisure Centre have offered anybody submitting a match programme from the Laois SFC semi-finals one free gym & pool session.  The offer is valid until October 6th.