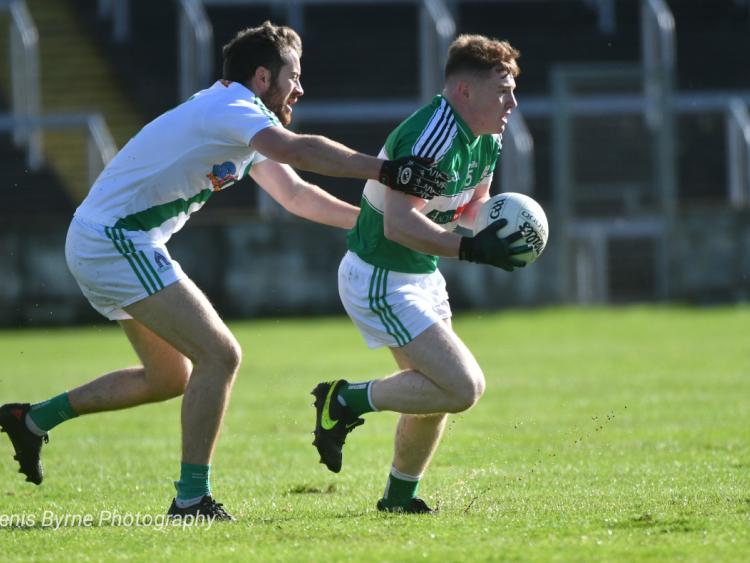 Ballyfin and Killeshin will have to do it all over again as 60-odd minutes of football couldn't separate the two teams in O'Moore Park this evening.

*Coverage brought to you in association with Portarlington Leisure Centre

After a tit-for-tat opening half the sides went for the dressing rooms on level terms at 1-6 apiece, with both goals coming from sloppy kick-outs.

The first flashpoint of the game arrived five minutes in, Killeshin's Evan Lowry picking up a black card for a clumsy challenge on Ricky Quillinan. Sean Moore hit for the first score of the game a minute later, but Killeshin annulled his effort directly after with David Aston converting his first free of the day.

Killeshin took the lead from the resulting kick-out with Laois senior star Eoin Lowry edging them ahead for the first time. It wasn't to last long however as Ballyfin got a run on them for the next five minutes. Darragh Connolly and Sean Moore (free) got them in front, and then a stray kick-out allowed Moore to side-foot to the net from close range for the first goal of the day.

Louis Duff extended the Ballyfin lead to five points by the 13th minute, but then Killeshin came roaring back two David Aston frees either side of a well-finished Cathal Brennan goal from a poor kick-out to level the proceedings with 20 minutes played.

The final ten minutes of the half saw two more points apiece with Allan Connolly and Darragh Connolly trading points with Eoin Lowry and Michael Doran to leave them stalemate at 1-6 each at the break.

It took five minutes of play in the second half before the first score arrived, Eoin Lowry coasting through the Ballyfin defence only to see his initial shot saved by Robert Foran. Lowry followed up with the rebound to lift Killeshin's second green flag of the day.

Killeshin increased their lead to four points with a Cathal Brennan free, but Ballyfin found their rhythm thereafter.

Killeshin edged ahead once more through Eoin Lowry a minute from time, but on the stoke of 60 minutes James Finn struck again for what would be the equalising point. With time all but up, Stephen Attride had one final pop at the Ballyfin goals but his effort tailed wide as both sides will now prepare to do it all over again on Wednesday night.

*The Leinster Express is delighted to team up with Portarlington Leisure Centre, the only public access leisure centre in Laois and Offaly to have attained the top level of Outstanding in the New National Quality Standards for Leisure for 2019.

As part of supporting our coverage, Seán Quirke and the team at Portarlington Leisure Centre have offered anybody submitting a match programme from the Laois SFC semi-finals one free gym & pool session.  The offer is valid until October 6th.