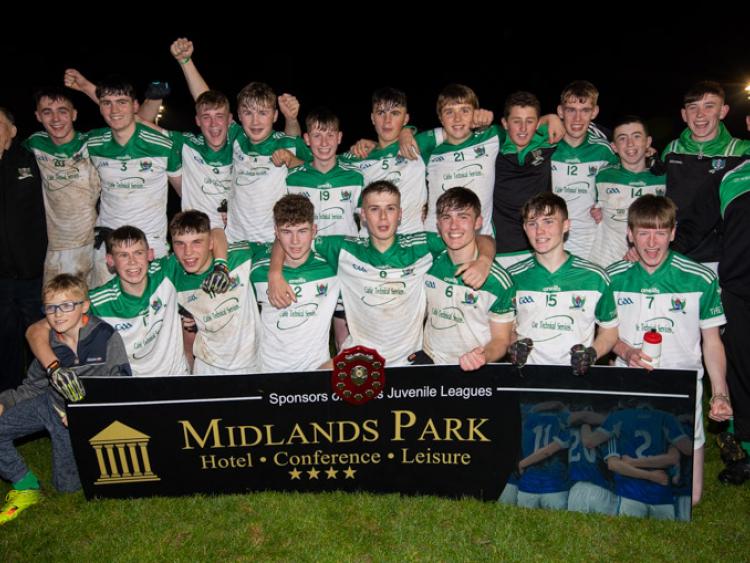 A point in injury time from Rosenallis full-forward Charlie Friel settled this U-17 ‘B’ county final on Friday night, as they edged out The Heath in a pulsating game.

Friel’s score was the first time Rosenallis had gone ahead in the game, as they trailed by as much as nine points at one stage in the first half. They kept plugging away and drew level twice in the second half, before Friel pounced to secure a dramatic victory.

The Heath will feel hard done by after playing their part in an excellent game of football, but they will just have to take the defeat on the chin and move on.

They had made such a promising start to the game as well, as they blitzed Rosenallis in the opening ten minutes. Wing-forward Jake Ratcliffe got the ball rolling with a superb point from the right wing with less than a minute on the clock, and they had a goal soon after.

A good run forward from Jack Reddy saw him get into the penalty area, and he worked the ball to Mark Phelan who blasted to the net. Rosenallis were struggling to make any inroads at this stage and quickly fell further behind when David O’Brien pointed from an acute angle.

The Heath were piling forward now and their next score was one of the best that the game produced. Corner-forward Peter Monnelly fed Aaron Thornton whose quick hands put Mark Phelan on the path to goal. He then offloaded to Jake Ratcliffe, who rifled a shot to the top corner for a beautifully crafted team goal.

The Heath’s midfielder William Conroy then landed a wonderful long-range score and they were 2-3 to 0-0 ahead, with Rosenallis scrambling to stay in the game. They needed to respond quickly and they duly did in the 11th minute.

Alex Marron was fouled going through on goal and they were awarded a penalty, which Charlie Friel stood up to take. His attempt was brilliantly saved by Ali Rasool, but the ball rebounded back to Friel who swept to the net at the second attempt.

Two minutes later a handling error in The Heath backline saw the ball fall to Aodh Bowes on the right of the penalty area, and he placed a precise show to the far bottom corner. In rapid fashion Rosenallis had re-established themselves in the game, and they would have had a third goal but for a goal line clearance from The Heath’s Dylan Booth.

The Heath hit two of the next three points to edge four ahead once more and then Bowes again hit back for Rosenallis with a thunderous shot for their third goal. Another point each for both sides left The Heath a point ahead at the break, 2-6 to 3-2.

Rosenallis were level with 20 seconds of the restart, but a full ten minutes would pass before the game would see another score. When it came, it was a point for The Heath from Aaron Thornton, and it prompted a mini purple patch. Midfielder William Conroy added their third goal with a shot to the top corner, and then Aaron Thornton scored an excellent long-range free to leave The Heath five ahead with 15 minutes left.

Rosenallis had it all to do now, but they outscored The Heath 1-4 to 0-1 in the closing stages. Charlie Friel accounted for all of those scores, the goal coming from a long-range free which found its way to the net. Jack Reddy got the point for The Heath to put them one ahead in the 56th minute, but another Friel free left it in the balance.

Then, with normal time elapsed, Friel got through on goal and saw his shot brilliantly saved by Ali Rasool. Friel was quickest to the rebound though, and his shot skimmed the crossbar and went over for what was the winning point.