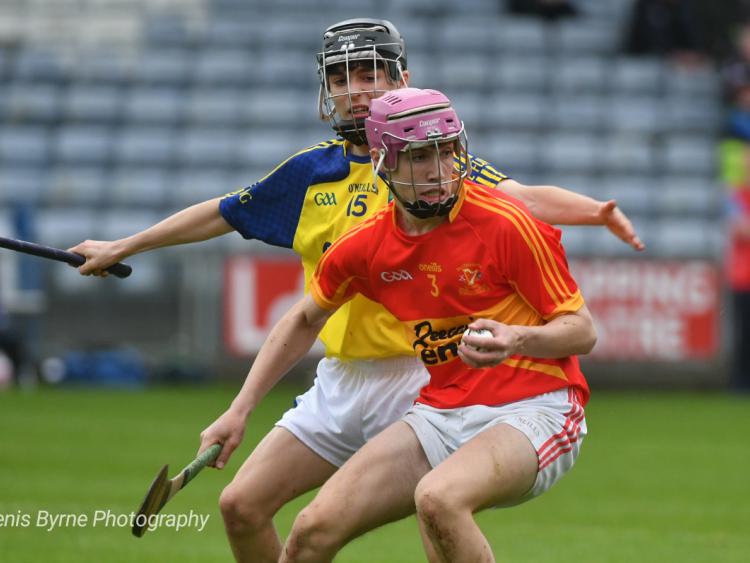 The Harps are the Laois U-17 ‘A’ hurling champions after overcoming local rivals Abbeyleix Gaels in O’Moore Park on Saturday.

In an exciting game played in awful conditions, a quick brace of goals in the first half set them on their way to victory. Abbeyleix kept themselves within striking distance for most of the game, battling on even after being reduced to 14 men, but Conor Delaney’s goal in injury time all but wrapped up the victory for The Harps.

Abbeyleix settled the quicker of the two teams and were a point up with less than a minute on the board. It came via a free, as Aaron Brennan stroked over an effort from 35 yards and the game was up and running.

Lee Maher doubled the Abbeyleix lead soon after before The Harps got in on the act with a point from Dylan Foyle. Another point from Maher restored the two point Abbeyleix advantage but The Harps were coming into the game a bit more now and a Ciaran Burke 65 got them back within one.

Brennan (free) and Cody Comerford then traded points before the first goal of the game arrived in the 10th minute. It went the way of The Harps, with Jim O’Connor providing the finish after he stole in behind the Abbeyleix defence, jinked away from ‘keeper Robert Corkish and tapped to the net.

That score energised The Harps players and supporters alike and they drove home that upturn in fortunes. Burke sailed over another 65 and then they got their second goal, with Jim O’Connor involved once more. He turned provider this time as he attacked the heart of the Abbeyleix defence before offloading to Cody Comerford. His first-time strike was well blocked by Corkish, but the ball fell kindly for Comerford and he swept it home to an empty net.

A surging run from The Harps wing-back Rían Edwards then set Conor Delaney up for a point from 30 yards, and The Harps were now in cruise control and leading by seven points.

This wasn’t in the script for Abbeyleix and they needed to settle themselves quickly, which they duly did thanks to a free from Aaron Brennan. The set up a tit-for-tat final ten minutes of the first half, with both teams trading points and neither really dominating the game.

Brennan provided most of the scores for Abbeyleix through placed balls, while for The Harps, Conor Delaney and James Duggan were on hand to keep their lead intact.

Abbeyleix almost had a goal before the half ended, but Lee Maher’s thunderous effort flashed wide of the post as The Harps led 2-8 to 0-8 at the interval.

The rain picked up over the half-time break and when play finally resumed, conditions were even more treacherous. Nonetheless, The Harps were inches away from a dream start to the second half when Jim O’Connor snuck a shot past Robert Corkish, but Abbeyleix corner-back Davin McEvoy read the play perfectly and got back to block the ball on the line.

Conor Delaney eventually got the opening score of the second half in the 36th minute when he burst through to blaze a shot over the bar from 20 yards out, putting The Harps seven ahead once more.

Abbeyleix were struggling to make any headway against a resolute Harps defence, as they had to wait 13 minutes for their first score of the second period. When it finally came there was a touch of Harps defensive resolution about it too, as Aaron Brennan went for goal from a 21 yard free, but ikey Monahan threw himself in front of the ball and deflected it over the bar.

Ciaran Burke quickly cancelled that out for The Harps with a long-range free, before a major talking point in the game arrived in the 47th minute. With Abbeyleix chasing the game Aaron Brennan tried to take a quick free, which Conor Delaney tried to prevent by standing in front of him. Brennan took the free anyway, catching Delaney in the process, and after some consultation referee Ronan Devanney issued Brennan a straight red card.

That sparked a furious reaction from the Abbeyleix management team, some of whom rushed the field to remonstrate with Devanney. Two of them were subsequently ordered from the field, and while all that was going on the Abbeyleix 45 yard line, a small row broke out amongst a handful of players in The Harps penalty area. When order was eventually restored, Abbeyleix were a man down and seven points in arrears.

Seven quickly became eight when Conor Delaney floated over a free and it all looked a lost cause for Abbeyleix now, but to their credit they steeled themselves and got back into it.

Cian O’Shaughnessy’s darting run ended with him getting a shot away which Adam Walsh brilliantly saved. Unfortunately for Walsh the ball bounced up perfectly for Lee Maher, who tapped to the net.

With momentum building Abbeyleix narrowed the gap further with a Cathal O’Shaughnessy point, and then Lee Maher’s effort for goal hit the crossbar and bounced away to safety, much to the relief of The Harps.

Abbeyleix needed to keep up that push for scores, but they couldn’t maintain it and The Harps finished strongly. James Duggan fired over a point for them and then a deft touch from Conor Delaney resulted in their third goal, all but wrapping up the victory.

Abbeyleix got a point back through Lawson Obular, but it was only cosmetic at that stage as The Harps had done more than enough to seal the win.