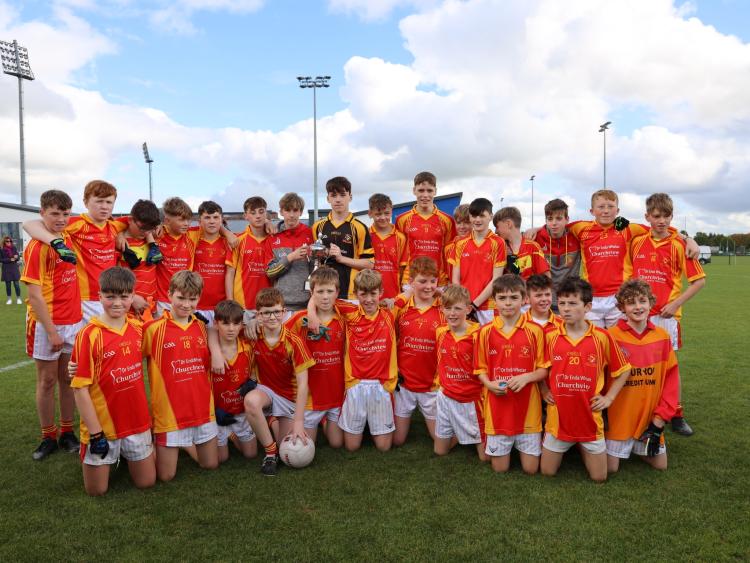 The Harps overcome a stubborn Kilcavan-The Rock challenge in an entertaining clash in the U-13 ‘B’ football final at the Laois GAA Centre of Excellence on Saturday morning.

The Harps overcome a stubborn Kilcavan-The Rock challenge in an entertaining clash in the U-13 ‘B’ football final at the Laois GAA Centre of Excellence on Saturday morning.

This talent crop of players from The Harps captured the double with this victory, adding to their ‘A’ hurling final title they claimed last weekend as they defeated Rathdowney-Errill in the decider.

Four first-half goals from Mark Downey (2), Jack Kennedy and Eoin Sheppard had The Harps well clear at half-time, but to Kilcavan-The Rock’s credit they staged a late rally with some fine scores.

Justin Duggan edged The Harps into the lead two minutes in, and the first goal of the day would follow two minutes later when Jack Kennedy looping shot from range nestled into the top corner of the net.

Mark Downey converted a free for his first of a 2-4 haul shortly after before Kilcavan-The Rock found their footing in the game.

A well-worked team move allowed centre-forward Evan Daly to dart through and send his drilled low-shot past goalkeeper Lochlan Curran to set them away.

The Harps replied with points from Eoin Sheppard and Duggan, and then goal number two arrived when Sheppard and Downey combined to see the latter rattle the net.

Kilcavan-The Rock replied instantly with a nice point from Niall Lalor, and a minute later they had their second goal - this time Aaron Lawler providing the well-taken finish.

The Harps closed out the half strongly with Sheppard and Downey both helping themselves to 1-1 apiece to send them in leading 4-6 to 2-2.

Kilcavan-The Rock retarted the game well with a quickfire brace of points from the goalscorer Oisin Lawlor, but then The Harps hit their stride once more.

Two Downey points either side of an impressive 1-1 haul from John O’Brien extended The Harps’ lead further.

Kilcavan-The Rock came to life in the final ten minutes to notch 1-4 to the scoreboard. Points from Oisin Lawlor (2), Evan Daly and Ben O’Keefe all sailed over.

Denied a green flag by the crossbar minutes previous, Aaron Lawlor made no mistake the second with a brilliant goal a minute from the end. The final score went to the winners, substitute Simon Comerford swinging over to seal the win.