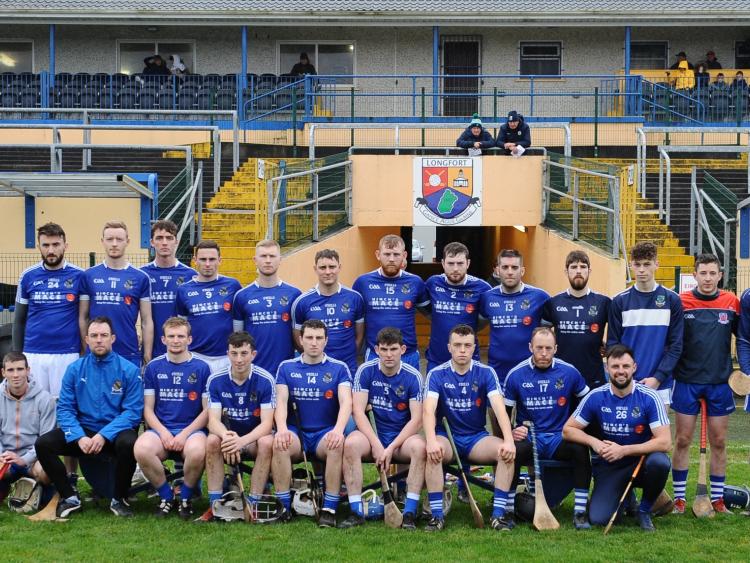 Mountmellick's venture into the Leinster Junior Hurling Championship came to an end on Saturday afternoon in Glennon Brothers Pearse Park with a defeat against the Joe O'Brien inspired Longford champions Clonguish Gaels.

Once again Joe O’Brien was their main marksman for Clonguish Gaels but they had strong performances all over the field in this  win for the Longford champions. They now take on Kilkenny side Conahy Shamrocks in the semi-final.

It was O’Brien who opened the scoring in the second minute when he pointed over a free. Down the other end Nigel Murphy forced Clonguish’s Eanna Daly into making a fine save before Michael Birmingham got their first score in the third minute.

O’Brien fired over two frees before Clonguish were awarded a penalty after Shane O’Brien was fouled. Joe opted to go for a point. In the 10th minute he found the back of the net with a superb goal from distance.

Another free from O’Brien put seven between the sides in the 12th minute. Donnacha Hartnett replied with a fine point for Mountmellick. James Hillard had a goal chance that went wide minutes later while Clonguish extended their lead to nine points in the 20th minute.

Hillard was accurate from dead ball situations and fired over two frees in a row to keep the Laois side in the game. O’Brien was equally as good with his frees and fired over another one for Clonguish in the 27th minute. Three frees from Hillard before the break saw Mountmellick cut the gap to six points: 1-09 to 0-06.

Bart Hanley hit over an excellent free in the 34th minute as Clonguish made a fine start to the second half. Hillard was unlucky to see his low drive go wide one minute later as Mountmellick went in search of a goal. He fired over another free minutes later.

Hanley fired over another great free in the 40th minute before Mountmellick got scores which cut Clonguish’s lead to four with 10 minutes of the game remaining; Hillard with three frees and Karl Donoher with a point from play after Hillard’s goalbound free was blocked down.

A sideline cut from Joe O’Brien in the 55th minute somehow ended up in the net with Alan Sorohan lurking in the small rectangle hoping to get a touch. Mountmellick replied straight away with a goal of their own through Hillard which left for an exciting final minutes of the game.

Hanley hit over a terrific point from play in the 60th minute while himself and Hillard exchanged frees before Nigel Murphy got Mountmellick’s final score of the game in the fifth minute of stoppage time.

Clonguish sealed a fine win with another free from Hanley and a neat point from substitute Kevin Burke right at the end.