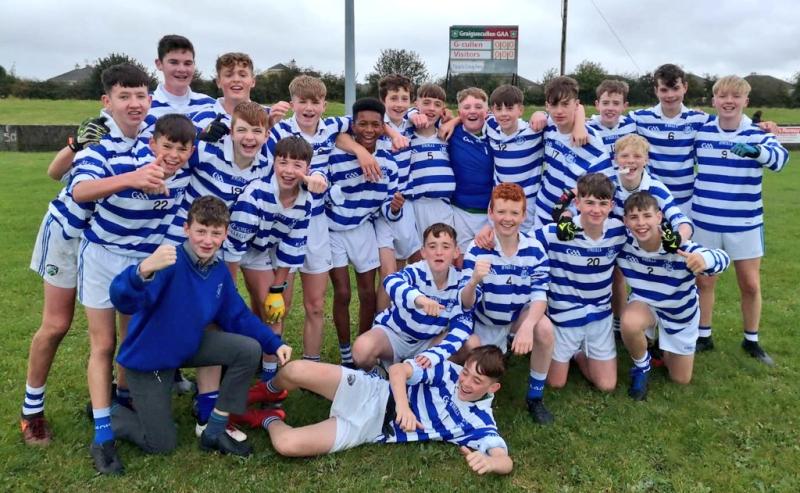 On a wet and miserable Friday morning, the Knockbeg 2nd year football team clambered onto the bus, looking forward to a match in where they would face Good Counsel of New Ross.

From the get-go, it was evident that the conditions would hamper both sides gameplans. Handling errors and misplaced passes were aplenty but Good Counsel were quick to get off the mark, scoring a goal straight from the throw-in and followed it up with a point off the kick-out.

This did not defeat the spirits of the Knockbeg team though, as John Phiri, TJ Nolan, Bobby Doyle and Mackenzie McIvor got crucial points, while Mikey Murphy finished off a well-worked team goal.

Cialan Brady scored two points either side of two Bobby Doyle goals. Unfortunately, this would be the end of the scoring for Knockbeg. At the half-time whistle, Knockbeg held a commanding 3-6 to 1-1 lead.

However, in the second half, Good Counsel came out firing on all cylinders, raising the white flag on numerous occasions.

Their superior physical strength as a team began to show in the heavy underfoot conditions whilst being aided by the home referee with some questionable decisions.

Midway through the half, Good Counsel scored a fortunate goal from a breaking ball in the square. This put them in a good position heading down the final stretch, but the closest they got was within two points.