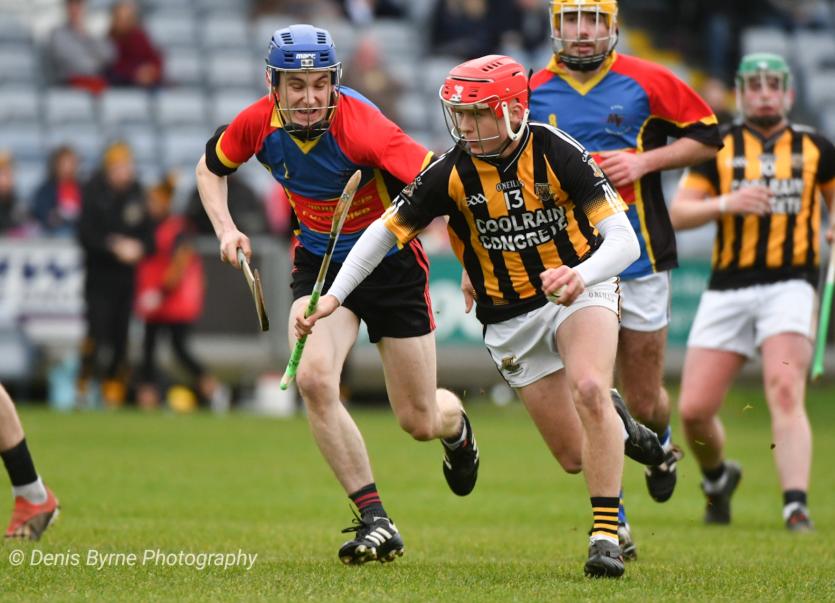 Camross collected the Laois U-20 hurling title this afternoon with a deserved victory over Raheen Parish Gaels in the decider at O'Moore Park.

Camross got off to an ideal start in O'Moore Park, lifting both a white and green flag inside the two minutes of play. Eoin Gaughan opened the scoring with less than a minute played, sending over a free from the halfway mark. Directly after, Oisin Bennett stormed through to send a low shot past Darragh Hiney in the Raheen Parish Gaels.

Camross pushed their lead out to five points with Gaughan's second free of the day, but James Keyes was on hand to open Raheen Parish Gaels account with a free of his own.

Paddy Hosey and Keyes pulled back points for Raheen Parish Gaels, but Camross kept the pressure on with three points from the in-form Gaughan.

Keyes narrowed the Raheen Parish Gaels deficit to four with a free, but then Camross got in for a quick brace of goals. Odhran Phelan got in for the first of the two with a well-taken finish, and then Oisin Bennett helped himself to his second after Mossy Keyes' shot was saved.

Raheen Parish Gaels kept in touch with another point from James Keyes, but Camross continued to enjoy the majority the possession with further points from Dan Delaney and Gaughan as we entered the final ten minutes of the half.

Camross tacked on another two points before the interval through Dan Delaney and Gaughan, but Raheen Parish Gaels closed out the half the stronger of the two sides with 1-1 in the dying minutes. Paddy Hosey converted a close-range free on the 30-minute mark, and then James Keyes rifled to the top corner from the penalty spot after Conor Madden was brought down on his route to goal.

Paddy Hosey sent over a free for Raheen Parish Gaels on the 45-minute mark, but Camross didn't let up with a further two points from Mossy Keyes, Niall Bennett and a Gaughan free.

Raheen Parish Gaels battled right through until the final whistle with points from Conor Madden, Keyes, Daly and Hosey but Camross the final point of the day went to the winners with Rob Tyrell firing over the final point in the third minute of injury-time.