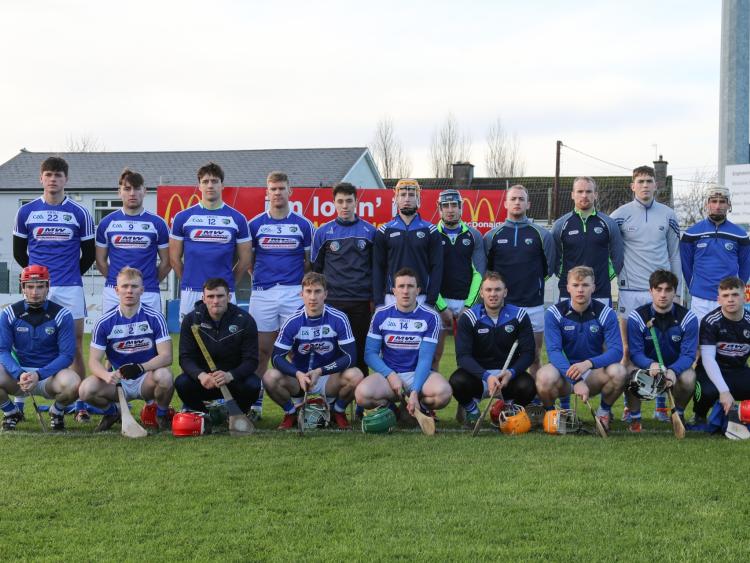 The Laois senior hurlers who took on Carlow in the opening round of the Walsh Cup at Netwatch Cullen Park, Carlow on Sunday last. Photo: Paul Dargan

It may have been a bitterly cold and damp day in Netwatch Cullen Park on Sunday last but both sides served up an excellent Walsh Cup first-round game. Crucially the visitors took their goal chances and at the end of this high scoring encounter that was what mattered.

Within a minute of the start, Aaron Dunphy whipped the sliotar over the bar for the lead point for the visitors. In response, Chris Nolan successfully converted a 65 and while Dunphy added another Laois point Carlow swept into a 0-5 to 0-3 lead on twelve minutes.

The game turned in a 13-minute spell when Laois outscored their rivals by 2-3 to 0-2. The first goal was created by Ross King who made space for himself before picking out debutant Ronan Murray who fired past rookie goalkeeper, Thomas Dowling, who had no chance.

The net-minder was unlucky for the second Laois goal but after getting his body behind Aaron Bergin’s shot from close range the sliotar fell behind the line.

Carlow were asked a question and, short their St Mullins players who had played Ballyhale Shamrocks in the Leinster final, they refused to allow themselves to be rattled.

They kept tipping away and with Chris Nolan deadly accurate from placed balls and Ted Joyce, John Michael Nolan and Cathal Tracey all registering points they didn’t allow the visitors to get away from them.

Ahead 2-9 to 0-11 at the interval Laois were not quite comfortable but they were edging proceedings. It took a while for the second half to burst into life.

Gaughan converted a 36th minute free but Nolan replied with one of his own for Carlow. Ciaran Comerford, who would go on to enjoy an excellent second half, added another Laois point. This was followed by further points from Ronan Murray and Aaron Bergin.

Eddie Byrne did break through the Laois cover and with two options he may have taken the wrong one when off-loading to a colleague the sliotar went to ground in the cold conditions. In hindsight, he would probably go himself the next day.

With 22 minutes to go Laois scored their third and final goal when Ross King was on hand when he picked up Willie Dunphy’s quest for a point which rebounded off the right-hand upright at the scoreboard end of the ground.

The corner-forward still had a lot to do but he held his head to shoot past the Carlow keeper. That should have been that but the home side plugged away.

In fairness both sides kept the scoreboard ticking over. With 0-12 to his credit, Chris Nolan was the home side’s leading scorer and even with that he still registered two wides which would have disappointed him.

On the other hand Laois, even at this early stage of the season, impressed. All six of their starting forwards scored from play. The defence didn’t concede any goals and apart from Byrne’s break never looked like doing so. This was a decent performance. They will know that but they won’t be running away with themselves at so early a point in the 2020 season.