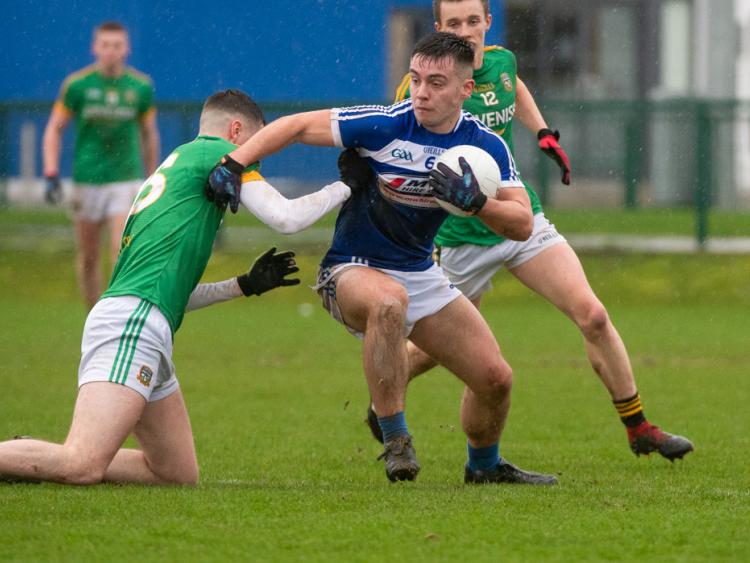 Gary Saunders, Laois, gets away from these challenges on Saturday during the John Kerins Cup Round 2 meeting between Laois and Meath. Photo: Denis Byrne

Having suffered a heavy defeat to Kildare in the opening round of the John Kerins cup last weekend, Eddie Kinsella's Laois U-20's were looking to get back on track with a home fixture against Meath on Saturday last at the LOETB Centre of Excellence, Portlaoise.

U20 John Kerins Cup Round 2

However, despite an improved performance from Laois at the back that limited a strong Meath forward line, Laois were unable to tack on enough scores to grab the win and they eventually lost out by four in the end.

Meath came out of the blocks much quicker, and the slow start would really cost Laois in the end. While midfielder Sean Michael Corcoran stroked over the opening score for the hosts, Meath responded with the next six points.

Luke Mitchell kicked over four of those six scores, with two coming from frees and another from a mark close to goals. Cian Rodgers and Aaron Lynch kicked one apiece, while it could have been much worse for Laois had goalkeeper Niall Gorman not bailed them out with a fine save.

Laois began to get going after that as Jack Owens fired over their first from play. Sean Michael Corcoran converted two more frees, and that meant Laois trailed 0-4 to 0-6 at half-time.

Manager Eddie Kinsella used this game to get a look at plenty of players, as he took off Gary Saunders and Sean O’Flynn at the break and brought on Jack Owens (Clonaslee) and Daragh Galvin.

Meath opened the scoring for the second-half with a Matt Moyles point, but Laois replied through a fisted Damon Larkin point. Laois were then let off the hook a bit, as Luke Mitchell thundered the ball off the post for Meath.

While the visitors did grab a point through substitute Dylan Keating, Laois reduced arrears to the minimum thanks to Colin Slevin and Corcoran (free) points.

There wasn’t much to separate the two teams at this point, with Cathal Hickey and Corcoran (free) swapping scores, but Meath managed to finish the stronger.

Luke Mitchell struck two between the posts, with his second a beauty, and while substitute Damien McCaul replied for Laois, two points in quick succession from Aaron Lynch and one from Mitchell made sure of the Meath win.