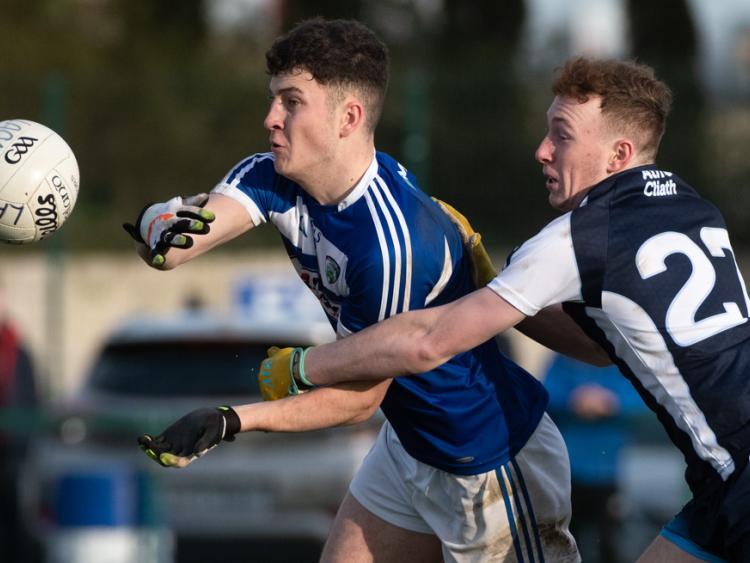 Barry Howlin, Laois, gets his pass away against Dublin in Round 3 of the John Kerins Cup at the LOETB Centre of Excellence, Portlaoise. Photo: Denis Byrne

The Laois U-20 footballers fell to their third defeat of the John Kerins Cup on Saturday last in the LOETB Centre of Excellence, Portlaoise with an injury-time Dublin goal snatching the victory.

Eddie Kinsella’s side had led for the majority of the game and held a narrow one-point lead heading into additional time only for the star of last year’s U-20 Championship, Dublin sharpshooter Ciaran Archer, to pounce for 1-1 in the final two minutes of additional time.

This loss signals Laois’ third on the hop, but results have significantly improved in the latter two rounds. Laois fell to Kildare in their opener by 13 points but bounced back to finish just four points off of Meath in Round 2 due to a late rally from the Royals. Laois had the beating of the beaten All-Ireland finalists Dublin in the LOETB Centre of Excellence and had the hard work done until Archer turned the result on its head.

Archer opened the scoring two minutes in with a free, but Laois restored parity a minute later when Laois full-forward Darragh Galvin split the uprights under considerable pressure from the Dublin defence.

Laois pressed on with the first goal of the day after just three minutes when a blazing run by Laois centre-back Gary Saunders was rolled into the net by his partner of the half-back line Jack Lacey.

Laois stretched their lead out to five points with a brace of points from Emo’s Jack Owens, one free and one from play, before Dublin dictated the play for the next fifteen minutes. A long-range effort from Cillian McGuinness floated over the bar and two more followed from Mark Lavin and Ciaran Archer (free) before Tom Gray’s side saw a goal chance hit the side-netting.

Laois managed two more before the interval through a Sean Michael Corcoran free and Owens’ third of the half, but Dublin wiped the slate clean on the stroke of half-time when Archer expertly dispatched a penalty to the bottom-right corner and send the sides in level at 1-5 apiece.

Laois restarted the game well with the first three points of the half going their way with Damon Larkin, full-back Alex Mohan and goalkeeper Matthew Byron (free) pushing Laois ahead.

Seven minutes into the half disaster struck for Laois as substitute Josh Lacey was brandished a red card.

Mark Lowry and Ross Bolger exchanged points shortly after, but Dublin’s dominance grew due to their numerical advantage. Points followed from Archer (2) and Cillian McGuinness were returned by a second Byron placed ball as Laois led precariously by a single point heading into injury-time.

With 62 minutes on the clock, Laois’ resilient defending was undone when Archer rolled the ball into the Laois net and followed with a point a minute later as Dublin emerged three-point victors.

Laois’ focus will now shift towards their Leinster Championship campaign beginning next month with a quarter-final against Westmeath on 15 February.