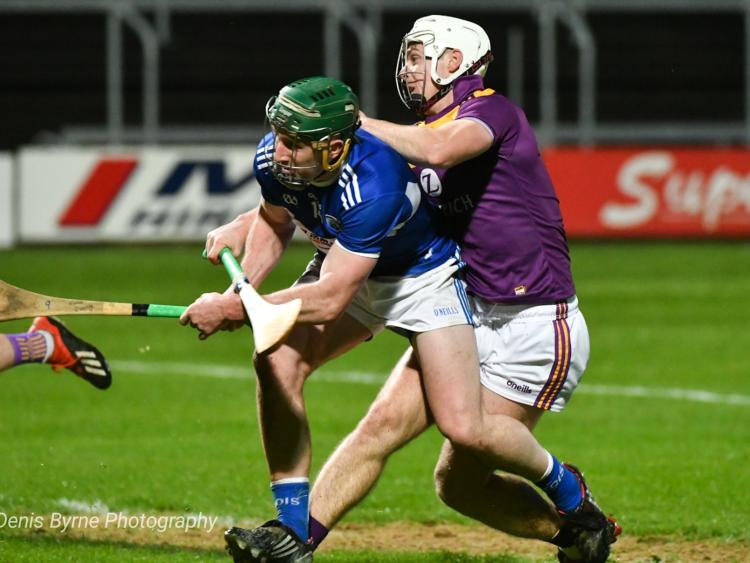 After a promising opening half of hurling where just two points separated the sides, the Laois senior hurlers fell to an 11-point defeat at the hands of Davy Fitzgerald's Wexford at MW Hire O'Moore Park, Portlaoise on Saturday night.

Laois trailed by two points at the break after holding their own the entire way through the first half, bit a wind-assisted Wexford finished strong to run out convincing winners in the end.

The home side were on the board first when Ross King converted a straightforward free to ease them into the proceedings. Wexford were on level terms a minute later when Jack O'Connor sent over his first free of the day, making amends for Paudie Foley's earlier miss.

Wexford went on to hit the next three points in a row through Liam Og McGovern and a brace of frees from Jack O'Connor before Laois stemmed the flow with a King free from a tricky angle ten minutes in.

Jack O'Connor added another free for the Slaneysiders to see them lead by three, but then Laois struck gold. Stephen Bergin collected the ball on the right-wing before cutting in and squaring to new vice-captain Willie Dunphy. The ball fell to the deck and Dunphy let fly to rattle the Wexford net.

Conor McDonald replied instantly for Davy's side but Enda Rowland was on hand to convert a monster free from just outside his own 21 to level the proceedings again.

Wexford edged ahead with an O'Connor free but with their tails up Laois hit another brace from Ross King to take the lead. O'Connor sent over his sixth placed ball of the half just after, followed closely by a perfectly-measured effort from All-Star nominee Jack Kelly to see Laois lead by the minimum.

Eight minutes passed before the next scores arrived, Liam Og McGovern and King raising white flags for their respective sides.

The game to life in injury-time with three goals arriving in the three minutes added on. Wexford hit for a quick-fire brace through McDonald and Aidan Nolan - McDonald's goal standing after initially being waved back by the referee for a foul by Ryan Mullaney.

Right on the stroke of half-time fortune favoured the home side when Enda Rowland's long ball into the square was dropped into the net by Wexford goalkeeper Mark Fanning to leave them trailing by just two points at the interval.

Laois reopened the half with a Ross King free having been fouled himself, but Wexford took the reigns and hit the next four without reply.

With 20 minutes to go Laois pegged on just their second of the half, again through Ross King. Conor McDonald and Rory O'Connor tacked on further scores for visitors before Enda Rowland was called into action to deny McDonald's shot destined for the bottom corner.

King kept Laois in touch with his third of the half 55 minutes in but Wexford were finding their rhythm and more points arrived from Shaun Murphy, Morris and Rory O'Connor to see them hold an eight-point advantage heading into the final ten minutes.

Laois found their range in the final ten minutes to hit five points from King (2), Willie Dunphy, James Keyes and Eoin Gaughan. Wexford, however, went a step further and cemented their win with a further eight points across eight separate scorers to finish 11-point victors in MW Hire O'Moore Park.