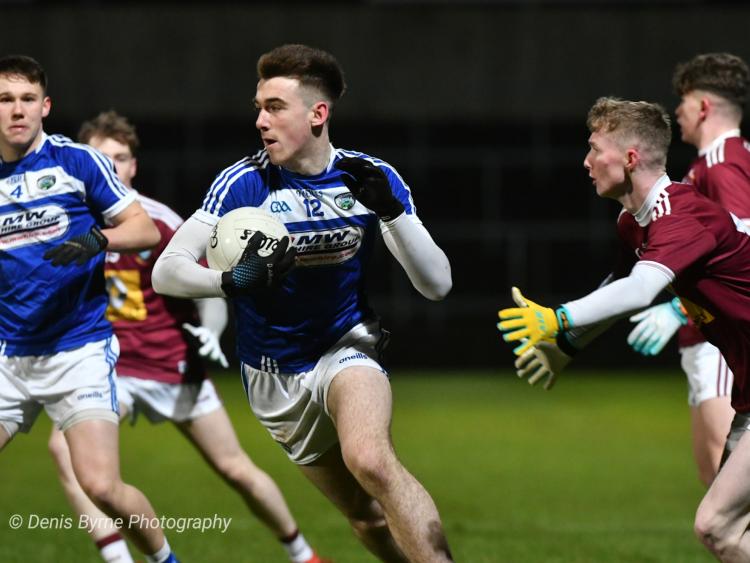 Laois are through to the semi-finals of the EirGrid Leinster U-20 championship after a dramatic penalty-shootout win over Westmeath last night.

With the sides inseparable after extra time, spot kicks were required to separate them and Westmeath’s Tommy Ryan saw his effort fly over the crossbar to hand Laois the win.

Despite playing into a stiff breeze, Westmeath made the better start and took the lead thanks to a point from Jack Murtagh. A minute later TJ Cox curled a free just inside the left-hand post to double their lead as the hosts took a while to get their bearings.

It was captain Ronan Coffey who eventually got Laois on the scoreboard when he capped off a nice run with a point in the seventh minute. Daragh Galvin then drew them level when he slotted over a point after claiming a mark, and then two frees from Coffey midway through the half put them ahead.

Jack Owens stretched the Laois further, but when Ronan Coffey was sin-binned for Laois Westmeath rallied late in the half, and they trailed by one at half time, 0-6 to 0-5.

Westmeath then drew level soon after the restart, through Jason Nugent, in what was the only score of the opening fifteen minutes of the second half. The next score was both significant and fortuitous, as Westmeath sub Kieran Colclough saw his mis-hit free from about 48 yards out somehow find the bottom corner of the Laois net.

That score sparked Laois to life, and Mark Barry (mark) and Jack Lacey pointed next to get them within one with five minutes left. It soon became a draw match when Barry then curled over a free which set up an exciting finale, as one more point apiece ensured the game went to extra time.

The sides couldn’t be separated there either as they were level on three occasions, forcing the game to penalties after it ended 1-10 to 0-13. Laois went first and scored four of their five, leaving all the pressure on Ryan, who saw his effort fly over the bar.