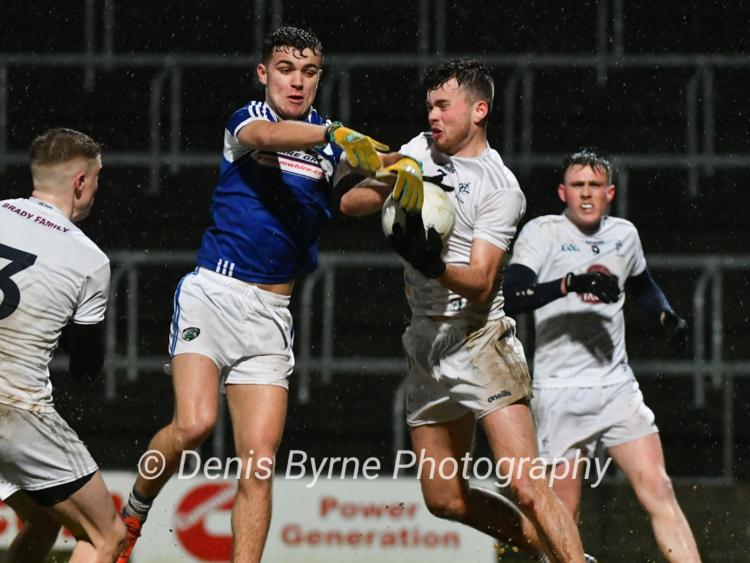 The Laois U-20 footballers are through to the Leinster final following a hugely impressive win over Kildare in tonight's semi-final played in miserable conditions at MW Hire O'Moore Park.

Playing into the swirling wind and incessant rain, Laois acclimatised to the conditions the better of the two sides in the early stages.

Boosted by the availability of senior duo Mark Barry and Sean O'Flynn, Barry was the one to set the scoreboard in motion with six minutes on the clock from a short-range free.

Laois capitalised on Kildare's wayward shooting and took the initiative when Barry Howlin's lumped ball forward was broken down to Damon Larkin and the Portlaoise forward made a bee-line to the Kildare goals and slotted low past Matt Anderson.

With the 20-minute mark fast approaching, Eddie Kinsella gave goalkeeper Matthew Byron, who converted the equalising point to force extra-time against Westmeath on Monday night, the nod to come forward for a placed ball and the Courtwood man didn't disappoint.

Kildare eventually got off the mark 22 minutes in, Alex Beirne dissecting the posts from close in to set them underway. Laois continued to keep on top with another Barry point, closely followed by a brilliant outside of the boot strike from Ronan Coffey.

Kildare closed out the half on a high with a late brace from Shane O'Sullivan and Darragh Kirwan to send them in trailing by four points, 1-4 to 0-3.

The second-half was a low-scoring affair with just four points registered in total, three for Laois and a solitary single for Gay Campbell's side.

Kildare narrowed the gap to a goal with Beirne's second of the evening, and they continued to ask questions of the Laois defence that was holding strong.

Mark Barry was on target from a free 45 minutes in, and then disaster struck for Kildare as full-forward O'Sullivan was brandished a red card for an off-the-ball incident with the excellent Gary Saunders.

Laois closed out the game with late points from Barry and Colin Slevin to send them through to a second successive Leinster final at this grade.