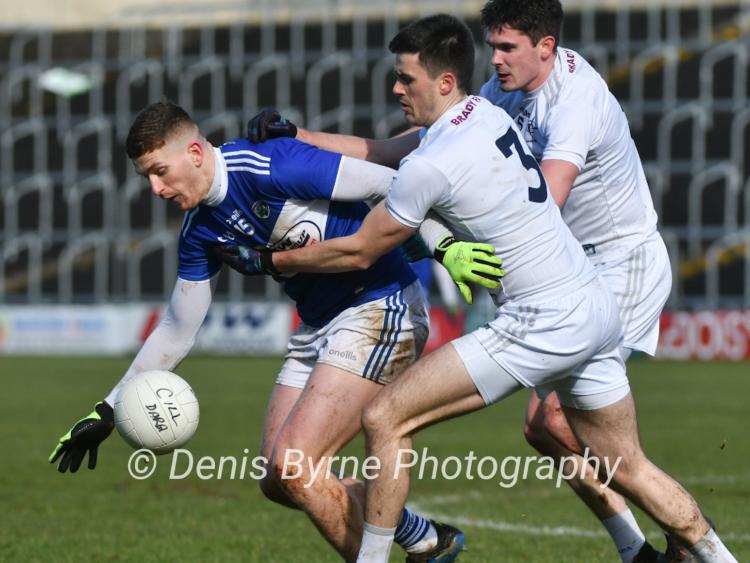 Laois have been dragged right back into a relegation battle in Division 2 after they fell to their second defeat of the campaign to the hands of neighbours Kildare at MW Hire O’Moore Park today.

Kildare began this clash in MW Hire O’Moore Park on fire, making their intentions known from the start with some serious pressure being put on the Laois backs which resulted in them kicking the first four scores.

Paddy Brophy, Adam Tyrell and Paul Cribbin (two) all raised white flags for the Lilywhites, who were seeking only their second win of the campaign after a slow start.

It took Laois fifteen minutes to get on the scoreboard, as Evan O’Carroll, who bring double teamed by Kildare duo Shea Ryan and Mick O’Grady, slotted over a free he earned himself.

Kildare hit back through experienced midfielder Tommy Moolick, but Laois U-20 vice-captain Sean O’Flynn responded brilliantly with Laois’ first point from play. The Courtwood man dodged his marker before sending one over with his left boot.

Kildare restored their four point cushion through the wily Niall Kelly. Laois nearly grabbed the first goal of the game though, as a fortunate bounce allowed Eoin Lowry the opportunity, but his shot off the ground was well saved by Mark Donnellan in goals.

Daniel Flynn, whose influence on the game was growing, robbed Paddy O’Sullivan off possession in the Laois half and was fouled moments later by John O’Loughlin. Kevin Feely came forward to kick over the free.

Liam Power made it a six point difference for Kildare, before Laois attempted to cut into that deficit at the half hour mark. Kieran Lillis floated over a beautiful over the top ball to O’Carroll, but from only a few yards out, the Laois full-forward skied his shot over the crossbar for only a point.

O’Carroll pointed another over the bar, this time from a placed ball, to leave Laois trai;ing 0-4 to 0-8 at the interval. However, Mike Quirke’s men could have been down more had Kildare been that bit more accurate in front of goals, as they accumulated eleven wides in the first half alone.

Mike Quirke opted to make no changes at half-time in the hope that the starting side would turn it around, but it was Kildare who nearly had a goal at the start of the half.

Kevin Feely caught the Laois defence asleep from a short free close to the goals, but Mark Timmons put in a brilliant last-ditch tackle to stop Daniel Flynn from scoring what looked a certain goal.

Paddy Brophy did manage to get the first score of the half for Kildare, before Laois had a goal chance of their own. Colm Murphy raced through, but his shot was weak and Mark Donnellan easily caught it.

Laois did finally get on the scoreboard ten minutes through the second-half after goalkeeper Niall Corbet made his way forward to launch over a free. However, the game started to get beyond Laois’ reach after Kildare strung together four points without reply.

Adam Tyrell kicked three frees, while wing-back Kevin Flynn added another from play. While O’Carroll managed to pull a free back for Laois from close-range, there looked to be no way back for the hosts.

Corbet showed his deadly accuracy from frees by stepping up to slot over another, but Paddy Brophy immediately responded for Kildare with a fine effort from play.

Both sides knew the game was up from there, with Brian Byrne and John O'Loughlin kicking scores for Laois near the end, but it proved too little, too late for Mike Quirke's men.