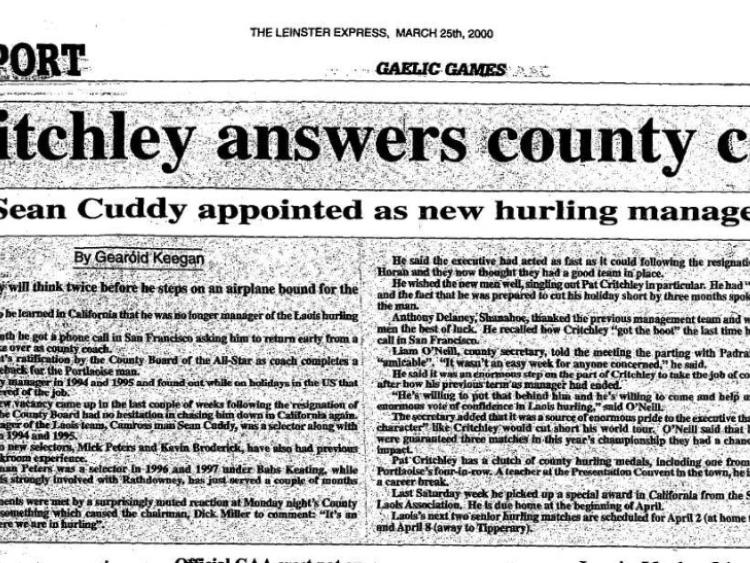 *This article was published in the Leinster Express on March 25th, 2000

Pat Critchley will think twice before he steps on an airplane bound for the US again.

Five years ago he learned in California that he was no longer manager of the Laois hurling team.

Then this month he got a phone call in San Francisco asking him to return early from a world tour to take over as county coach.

Monday night’s ratification by the County Board of the All-Star as coach completes a remarkable comeback for the Portlaoise man.

He was county manager in 1994 and 1995 and found out while on holidays in the US that he had been relieved of the job.

Yet when a new vacancy came up in the last couple of weeks following the resignation of Padraig Horan the County Board had no hesitation in chasing him down in California again. 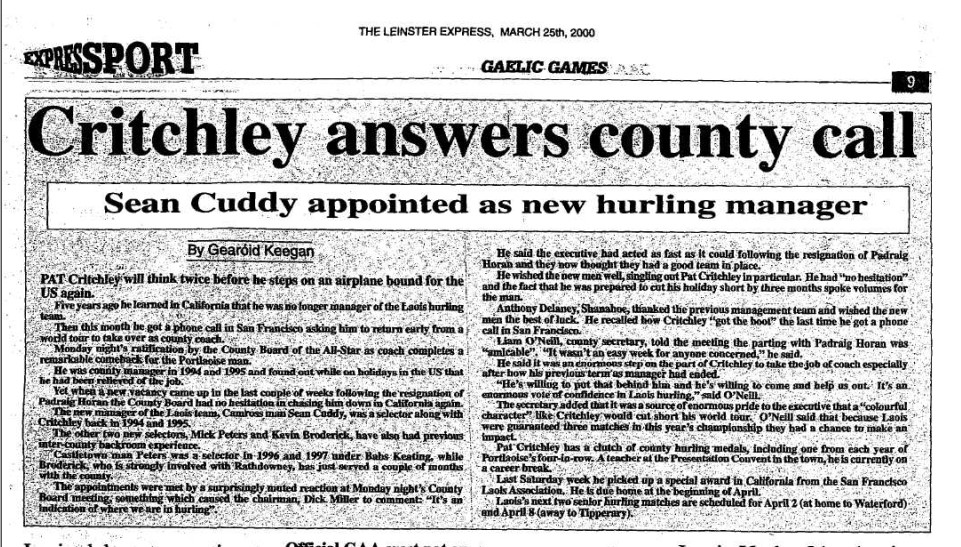 The new manager of the Laois team, Camross man Sean Cuddy, was a selector along with Critchley back in 1994 and 1995.

Castletown man Peters was a selector in 1996 and 1997 under Babs Keating, while Broderick, who is strongly involved with Rathdowney, has just served a couple of months with the county.

The appointments were met by a surprisingly muted reaction at Monday night’s County Board meeting, something that caused the chairman, Dick Miller to comment: “It’s an indication of where we are in hurling”.

He said the executive had acted as fast as it could following the resignation of Padraig Horan and they now thought they had a good team in place.

He wished the new men well, singling out Pat Critchley in particular. He had “no hesitation” and the fact that he was prepared to cut his holiday short by three months spoke volumes for the man.

Anthony Delaney, Shanahoe, thanked the previous management team and wished the new men the best of luck. He recalled how Critchley “got the boot” the last time he got a phone call in San Francisco.

Liam O’Neill, county secretary, told the meeting the parting with Padraig Horan was “amicable”. “It wasn’t an easy week for anyone concerned,” he said.

He said it was an enormous step on the part of Critchley to take the job of coach especially after how his previous term as manager had ended.

“He’s willing to put that behind him and he’s willing to come and help us out. It’s an enormous vote of confidence in Laois hurling,” said O’Neill.

The secretary added that it is a source of enormous pride to the executive that a “colourful character” like Critchley would cut short his world tour. O’Neill said that because Laois were guaranteed three matches in this year’s championship they had a chance to make an impact.

Pat Critchley has a clutch of county hurling medals, including one from each year of Portlaoise’s four-in-a-row. A teacher at the Presentation Convent in the town, he is currently on a career break.

Last Saturday week he picked up a special award in California from the San Francisco Laois Association. He is due home at the beginning of April.

Laois’s next two senior hurling matches are scheduled for April 2 (at home to Waterford) and April 8 (away to Tipperary).