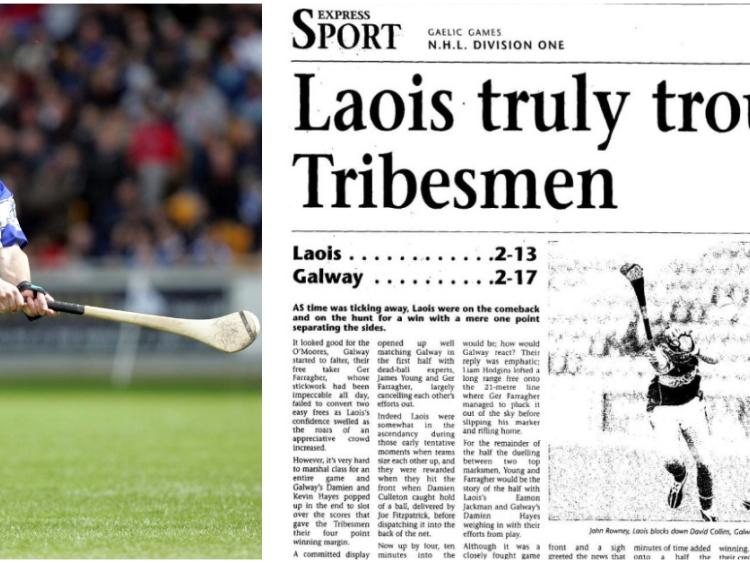 *This article was published in The Leinster Express on March 10, 2005

AS time was ticking away, Laois were on the comeback and on the hunt for a win with a mere one point separating the sides.

It looked good for the O'Moores, Galway started to falter, their free taker Ger Farragher, whose stickwork had been impeccable all day, failed to convert two easy frees as Laois's confidence swelled as the roars of an appreciative crowd increased.

However, it's very hard to marshal class for an entire game and Galway's Damien and Kevin Hayes popped up in the end to slot over the scores that gave the Tribesmen their four point winning margin.

A committed display from Laois they opened up well matching Galway in the first half with dead-ball experts, James Young and Ger Farragher, largely cancelling each other's efforts out.

Indeed Laois were somewhat in the ascendancy during those early tentative moments when teams size each other up, and they were rewarded when they hit the front when Damien Culleton caught hold of a ball, delivered by Joe Fitzpatrick, before dispatching it into the back of the net.

Now up by four, ten minutes into the game, the question would be; how would Galway react? Their reply was emphatic; Liam Hodgins lofted a long range free onto the 21-metre line where Ger Farragher managed to pluck it out of the sky before slipping his marker and rifling home.

For the remainder of the half the duelling between two top marksmen, Young and Farragher would be the story of the half with Laois's Eamon Jackman and Galway's Damien Hayes weighing in with their efforts from play.

Although it was a closely fought game Galway were edging in front and a sigh greeted the news that there’d be four minutes of time added onto a half the Connaught men were winning. But Laois to their credit kept a grip of their nerve and the contest and were merely trailing the men from the west on a 1-10 to 1-6 scoreline.

Although Galway showed the greater composure when collecting the ball delivered at pace in the first period, it was Laois who exhibiting the greater urgency in tackling this game after the break.

They looked revamped and spirited, possibly hit by the realisation that they weren’t overrun and as belief in their ability visibly grew so too did the shouts and cheers of the crowd.

Nevertheless, Galway had to shine too. Ollie Canning set up David Forde on a long solo run before tapping his side five points ahead before James Young reined them in. The O'Moore's followed up with a searing run from Liam Tynan, as he drew men towards him before hand passing to Canice Coonan to neatly slot over from 40 metres out.

Aongus Callan and Damien Hayes kept their side in front and that margin increased when Niall Healy cracked the ball past Patrick Mullaney to put them ahead by six points.

But Laois weren't beaten, James Young hit a 65 before he turned provider for Mark Rooney who caught and fired a rasper into the top of the net.

With Tommy Fitzgerald laying off the ball to Joe Phelan, the synchronicity of Portlaoise men was in evidence as Joe found the range, raising the white flag and putting one point between the pair.

However, Laois from this vantage point couldn't push-on and in this game of give and take, Galway took their chances when it was their turn to dominate again with Damien Hayes 0-2 and Kevin Hayes to coming to their rescue hammering three beautifully taken points over the bar.

In all a solid display from Laois where some stylish and composed hurling will have won them some much needed support for the three games to come. It will also serve as a moral booster and evidence that their form is improving as they go on to face Down, Limerick and Antrim in the deciders for top flight action next year.