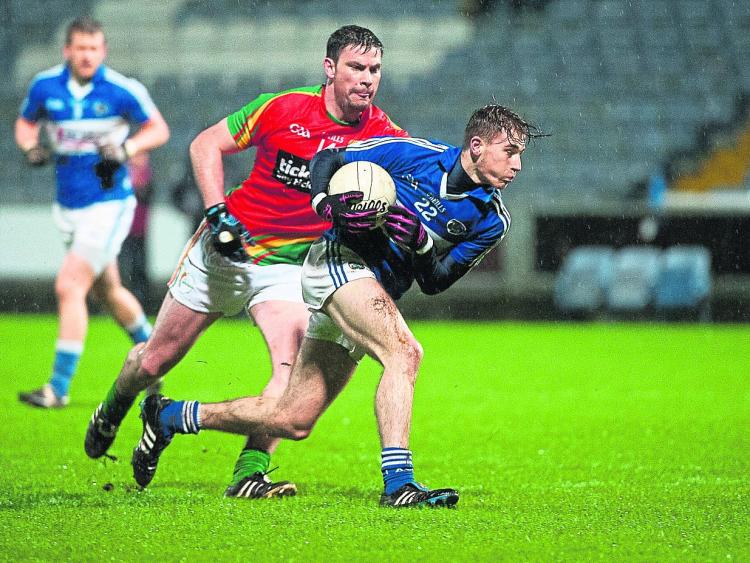 *This article was published in The Leinster Express on March 19, 2015

Laois set up a Leinster SFC quarter-final date with Kildare thanks to this one-sided win over Carlow in Netwatch Cullen Park on Saturday.

Tomas O Flatharta’s side were never in any danger as they cruised past the home side without too much fuss, running out 17 point winners at the final whistle.

Having won the toss and played with the wind in the first half, Laois were six points up midway through the first half. Carlow managed to get the gap back to four, but Conor Boyle’s goal in the 26th minute quickly dispelled any notions they might have had of getting something from the game, as Laois simply pulled further and further ahead after that.

With no injuries picked up and some impressive displays, the game went according to plan for Laois, but in reality it will have provided little benefit to either side. Laois probably won’t meet a team on Carlow’s level again in the championship, and it certainly won’t have helped them to get ready for the challenge Kildare will bring.

Kildare won’t allow Laois to dominate in midfield like they did here, and both the forwards and backs will be under significantly more pressure than they were here.

It will be Kildare’s first outing since their relegation from Division 2 as well, and Laois will meet them in what is their first chance to put things right after that debacle.

As the Laois senior hurlers discovered up in Antrim, it pays to beware a team on the back of a relegation. Kildare will have been eyeing up this game since the loss to Galway, so everyone involved will have to on guard.

On this occasion, Laois got the job done with the minimum of fuss. Ross Munnelly won the toss and opted to play with the wind in the first half, and it was the right call as Laois quickly put it to their advantage.

Darren Strong opened the scoring in the third minute with a point from the right-wing, and Colm Begley quickly added another with an impressive effort from long range. A quick-ly taken Ross Munnelly free resulted in Donie Kingston curling over the bar from 35 yards, and Laois were already well on top.

Donie Kingston added another soon after, having been set up by younger brother Paul, and a lovely passing move resulted in Conor Boyle tapping over the bar from 25 yards out.

John O’Loughlin replied for Laois but Carlow enjoyed their best spell of the game after that as Kieran Nolan and Darragh Foley (free) helped them to get within four points of Laois.

For their part, Laois were struggling to hit the target as their shooting started to let them down, but they soon put things right. A slick passing move resulted in Conor Boyle charging into the penalty area, and he calmly rounded goal-

That score really took the wind from Carlow’s sails, and Laois pressed home their advantage.

Evan O’Carroll pointed a 45 and Donie Kingston added a free following a foul on brother Paul on the left wing. The last score of the half came from the left boot of John O’Loughlin, and that left Laois with a commanding ten point lead at the break, 1-10 to 0-3.

Carlow’s only crumb of comfort for the second half was that they would have wind advantage, and they opened the scoring on the restart with a free from Darragh Foley. Laois hit back in ruthless fashion as Donie Kingston pointed a free, Ross Munnelly curled one over from the right wing and then Paul Kingston opened his account as Laois went 12 ahead.

Carlow, to their credit, came back with two points in as many minutes, from Derek Hayden and Daniel St Ledger, got them back to where they were at halftime.

That was as good as it got for the home side, however, as Laois kicked for home after that. A good move between Brendan Quigley and John O’Loughlin resulted in O’Loughlin kicking his third point, and then a brilliant low shot from Donie Kingston nestled in the bottom corner.

That ended whatever competitive edge there was to the game, and Laois did manage to add one more goal before the end. Sub Tom Shiel raced in from the left wing and hammered the ball into the roof of the net as Laois finished in emphatic fashion to book their date with Kildare.