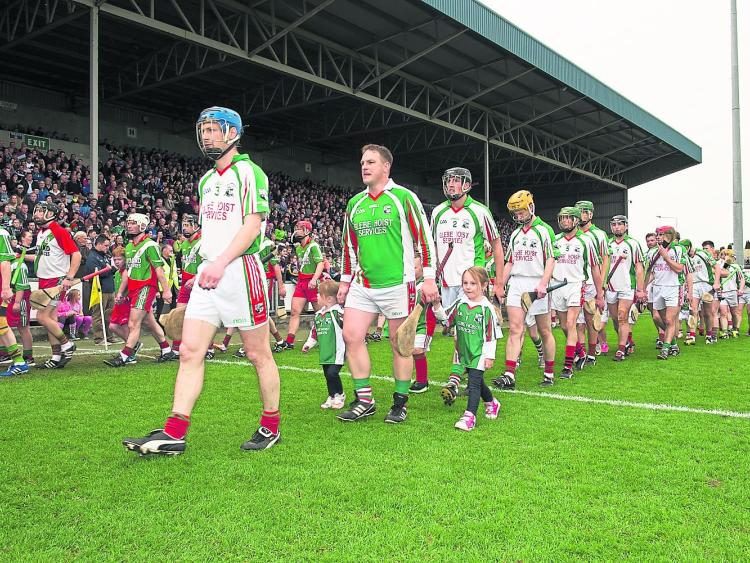 *This article was originally published in the Leinster Express on October 11, 2016

We could go on, but we'd probably still fail to do justice to one of the most incredible games of hurling ever seen in Laois.

The greatest senior hurling final, probably ever, to take place in the county played out in front of an enraptured audience on Sunday in O'Moore Park.

Ross King's late point, deep into injury time, saw the teams end level at 2-26 each, an incredible scoreline to match an incredible game. All that is good about Laois hurling was on display here, as two well-prepared teams peaked at the same time.

Scores rained in from all distances and angles as players from both teams seemed to find a level of performance outside of what most thought possible beforehand. They fed off the energy and quality of each other, and it resulted in a game that almost defied belief.

Borris-Kilcotton were disappointed at the final whistle, understandably so given the timing of the equalizer, but a draw was probably a fair result. Certainly, the mental strength of Rathdowney-Errill to haul themselves back into the game in the closing 15 minutes deserved some reward.

The skirmish which broke out at the final whistle was an unfortunate ending to a game which will have been imprinted in the memory of everyone who was lucky enough to witness it.

A replay at least affords us all the chance to watch these teams battle it out again, and who would have turned that chance down at half time here, when the score read 2-14 to 1-17. The teams had managed 34 scores in the first half alone, and the game ended with 56. We'll hardly be lucky enough to see numbers like that in the replay, but there will be plenty of interested spectators waiting to see what does happen.

Trying to summarise the action here in the rest of this report almost seems futile, given how much happened. The touchpaper was lit in the third minute when PJ Scully, who Borris-Kilcotton had been adamant all week would not be fit to start, duly lined out and opened the scoring with a free.

Ross King responded in kind for Rathdowney-Errill, and so it all began. Scully jogged back to take a free on his own 45 yard line and duly slotted it over, with Tadgh Dowling restoring parity moments later. Jim Fitzparick landed one from distance and Scully slotted over another free as Borris-Kilcotton looked like taking control early, but that wasn't to be the case.

John Purcell pounced on a ball in the penalty area to get the game's first goal, and Rathdowney-Errill took the lead, 1-2 to 0-4. Within a minute, Borris-Kilcotton had gone back in front with points from Joe Campion and Patrick Whelan, as the breathless nature the half was to take had been firmly established.

Rathdowney-Errill responded with two points in a minute themselves, Ross King and Liam O'Connell the scorers, and after just ten minutes the score was already 1-4 to 0-6.

PJ Scully's free levelled the scores before he landed the ball in the square, a brilliant bit of skill from Neil Foyle saw him control the sliotar before firing to the net.

The second half was no less entertaining, even if the scoring from both teams slowed down a little. A couple of points apiece kept the scores level early in the half, before Borris-Kilcotton made a break for victory. PJ Scully pointed a couple of frees to put them two ahead, and then Daire Quinlan played Neil Foyle through on goal, and he found the back of the net. A five point lead, and fifteen minutes to go, everything looked rosy from Borris-Kilcotton's viewpoint.

Credit just has to go to Rathdowney-Errill for coming back from there though. Their comeback started with two points from Ross King before a shot from Joe Campion was controversially waved wide.

They got the gap down to one with eight minutes of normal time left, and then Borris-Kilcotton got going again, and they managed to keep themselves ahead until Tadgh Dowling scored three outrageously good points to level the game at 2-24 each with normal time up.

When PJ Scully and Neil Foyle then pointed to give Borris-Kilcotton the lead, they were on the cusp of history, but Ross King intervened to secure a replay.

An almost impossible task to single one player out. Neil Foyle, Aaron Dunphy and Joe Campion were outstanding for Borris-Kil-cotton, Joe Fitzpatrick likewise for Rathdowney-Errill, but we'll give it to Ross King. Scored 0-14 and had the nerve to nail those two late points to get the draw.

How will they top it in the replay? In truth they probably won't, but it will still be a fascinating game, whatever way it plays out.

This game had more turns than a corkscrew, but Rathdowney-Errill hitting four points in a row after Foyle's second goal was crucial in keeping them in it.

Despite taking some abuse after the game John Lalor did well. Was consistent with the advantage rule and tried to keep the game flowing.

Has there ever been a better Laois SHC final? It seems highly unlikely, 56 scores in a single game is incredible.

The skirmish at the end, coupled with the abuse of John Lalor, was not nice to see.