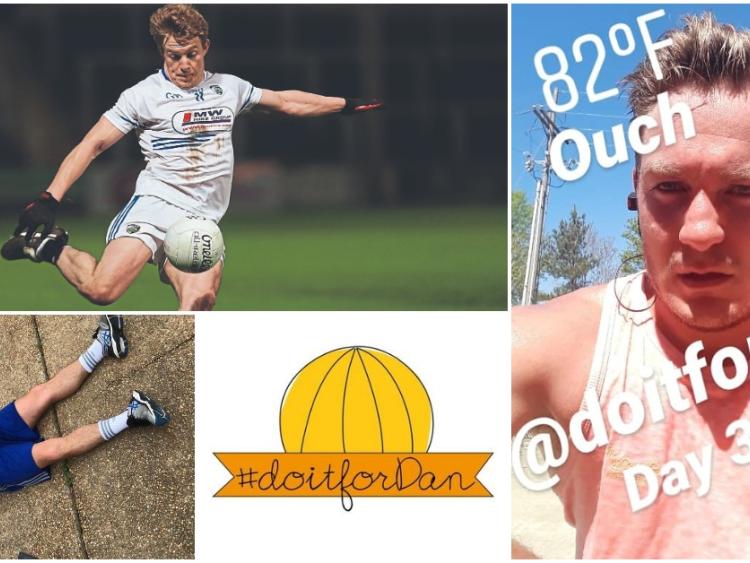 Over 4,000 miles away from baby Dan Donoher’s home in Ballybrittas in Laois, an old footballing foe, ally and friend of his Dad has raised almost €8,000 towards his potentially life-saving treatment by running 100km in 10 days.

Arles man and long-time friend of Dan’s father Niall, David Conway, is the unwilling protagonist who felt obliged to lend his support in whatever way he could. A former Laois footballer on a career break from teaching, Conway soldiered alongside Niall in the blue and white of Laois from U-14 development squads through to Niall’s retirement in 2018.

“Niall and I date back a long way,” he laughs. We (Arles) played Niall’s club Courtwood in the U-12 Football Championship many moons ago. It was a three-game saga, we drew twice, and unfortunately, they best us in the third one.

“Niall and I ended up marking each other in midfield - but it was a few years later until we knew it was Niall Donoher. We’re the same age so we would have come up together the whole way along. Playing with and against each other over the years.

“As it went on, for every year the two of us were involved with the Laois seniors we actually sat right beside each other. You get your seat in O’Moore Park, you sit there for every training session and every match - so we were right next to each other for all the years that we played together.

“When it’s a guy you soldiered with for so long, and the kind of personality that Niall is and all the heart he has, I just felt a bit useless being so far away. So anything I could do to help in some small way was a no-brainer, to be honest.”

The Do it For Dan campaign is in aid of the only child of Laois football greats Niall and Aisling (nee Quigley) whose little boy turned one year old on Saturday, March 28. He suffers from a rare disease called Spinal Muscular Atrophy Type 1 as well as scoliosis.

It gives him a life expectancy of just two years, however the family hope that they can raise US$2.1 million for a new treatment in the US that could improve his quality of life and chance of survival. A GoFundMe account was set up by a committee formed by friends of the couple and it sparked a flood of nationwide support.

Conway takes the call for this interview on Sunday night (Irish time) while on a layover from the first leg of his journey home from Mississippi to Boston, before a flight back to Dublin on Monday as the international coronavirus lockdown continues.

“Living in America at the time and seeing different fundraisers and events for Dan back home, I felt a bit useless. It was kind of hard to not be a part of it in some small way.

“The irony that I was based in America and this is where Dan is striving to get to wasn’t lost on me. I just said I’d try a rally the troops over this side of the water if I could at all and raise some awareness.

“In fairness, the 100km in 10 days wasn’t an original idea. I saw Mark O’Halloran from back home and his girlfriend had come up with the idea initially. So I just rang him to see if he minded me piggy-backing on their idea and he said to fire away.”

When asked when he last ran a 10k, Conway responds with a contained chuckle.

“Once. I ran the Howth Summit Run about five years ago - but other than that I’ve never, ever, done anything like it before in my life.

“It was tough because even if you’re absolutely in peak football condition, it’s a different test of the body. You never run a straight 10k without stopping.

“The humidity and heat wasn’t ideal either, so I used to get up early in the morning to get it done. It was always 25 to 30 degrees out. One day I was out it was 32 degrees. Lovely weather to be laying out in, but not lovely weather to be out running in!

“The first two kilometres of each day was hard until the legs woke up. That goes and then it’s your mind that’s getting at you because it’s telling you that you can’t do it. It’s funny though; even your mind gets stronger over the few days once you’re telling yourself, ‘Well, I was wrecked at this stage yesterday but I still managed to get home’.

“Because of my knee (a recurring injury) I’m not technically supposed to run that much. Throughout my travels I tried to get into the gym where I could, get up on a bike or cross-trainer. Non-impact stuff. So with this I went to the other extreme, full-impact.

“It just shows, the little things you worry about in life. ‘Aw, my knee is a bit sore’ or this or that. It kind of puts it all into perspective, just how tough a situation poor little Dan is in. It makes it all relative. It makes the aches and pains I got from running seem like absolutely nothing.

“The running was the easy part. Throw a bit of music in the ears and away you go. I had a couple of emotional songs in the playlist too which would drive you and motivate you - basically make you realise how lucky you are and how little we actually have to be worrying about,” explained Conway.

With an original goal of €2,500, the end result will surpass the €8,000 mark when Conway closes his fundraiser on Tuesday evening.

“I definitely didn’t think my fundraiser would raise what it did. To be honest, there are so many people that I know that had already given so much to the ‘Do it for Dan’ GoFundMe page that I thought it might be like going back to the same well. But I was drastically wrong, and it just shows how great people around the county are. Even those who would have no idea who Niall or Aisling are.

“I set my target at €2,500 and I would have been delighted with that, but once it started building I was only more than happy to get a bit greedy for the cause that was in it. I thought I was adventurous with the original goal, but I ended up having to extend it a few times.

“I’m just delighted to be able to do any small thing that will help the cause and get Dan his treatment,” finished Conway.