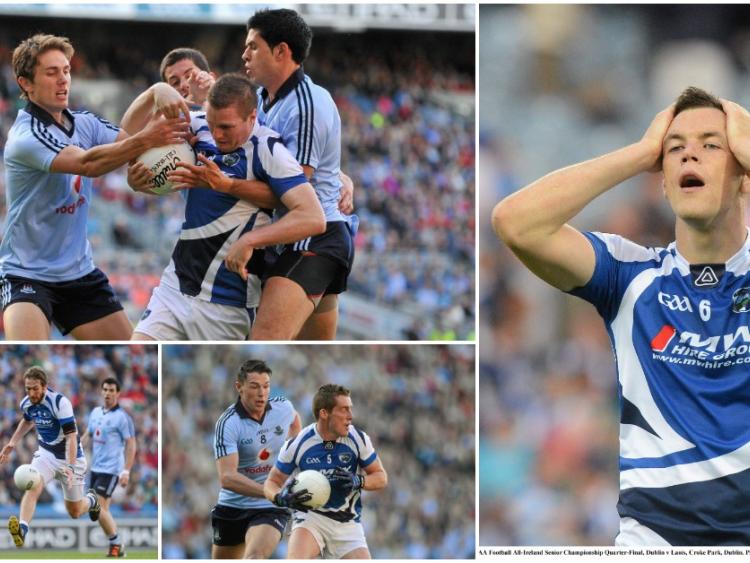 What might have been. Four of the hardest words to read for a Laois GAA supporter after the weekend.

All you can ask for in sport is a chance, and Laois gave themselves just that in an absorbing All-Ireland quarter-final on Saturday night, but they just couldn’t apply the finish to a marvellous evening’s work.

Laois did as much as any team could have done to keep tabs on the reigning All-Ireland champions, and but for a cruel own goal then we’ll never know what could have been from this game John O’Loughlin’s last ditch attempt to block Michael Daragh McAuley’s effort for a point took a wicked spin off his outstretched hand, looping over Eoin Culllton and dropping into the net. It gave Dublin a goal they scarcely deserved, and Laois spent the rest of the game trying to make up for it.

At times they looked like they had Dublin on the way out of the 2012 championship, but despite having their thumb on the champions Jugular, Laois Just couldn’t deliver a killer touch to the immense amount of hard work they put in during the game.

It is hard not to draw comparisons at times like this, but you only need to look back to the last championship meeting between the teams to see how much Laois have developed. In 2011 Dublin sauntered to an easy win against a Laois team that looked beaten before a ball was thrown in At the weekend, they were met by a vastly different team, one more comfortable in their skin that had the confidence to stand up to Dublin and not be intimidated.

It was a committed and patient performance from Laois, who didn’t try to force the game and showed remarkable maturity in what for many was the biggest game of their careers. Justin McNulty has always been quick to praise the team, and it was certainly a fine team performance.

Credit must also go where it Is due as well and to that end Cahir Healy was outstanding. He completely dominated his duel with Bernard Brogan, to such an extent that Pat Gilroy called ashore his marquee forward before the game was over. Peter O’Leary too was superb in nullifying Diarmuid Connolly, while Billy Sheehan put in a massive amount of work during his time on the field as well.

There are plenty of positives for Laois to take from season’s end, the first time in quite a while that is the case. They took the game to Dublin in the first half, with Colm Kelly opening Laois’ account for the day after six minutes, courtesy of a free, to cancel Paul Flynn's early opener.

A minute later Laois took the lead for the first time, a well worked team move ending with Ross Munnelly cutting in from the left wing to stroke over a lovely point. Bernard Brogan then responded for Dublin when he got away from Cahir Healy for the only time in the game to race through and thump a shot over the bar.

Undeterred, Laois came right back and went ahead again when Ross Munnelly cooly slotted over a free after Gary Walsh had been fouled. That point came either side of two missed frees from Laois, one from Munnelly and one from Colm Kelly, as Laois had their chance to open up a decent lead but just couldn’t take It.

They were made to pay when Dublin midfielder Denis Bastick, a man with family from Laois, leveled the game with a fine point from the right wing. Bernard Brogan then thought he was through on goal again only for Healy to thwart his attempt, and Laois took the lead for the third time when they showed great patience In possession to eventually tee up Gary Walsh, and he scored from 35 yards out.

Brogan replied with a free for Dublin, and both teams went score for score then, with Begley and Munnelly (free) scoring for Laois and Brogan and Cluxton both converting placed balls for Dublin. Then, eight minutes before half time, the game’s crucial score arrived.

Michael Daragh McAuley played a one-two on the left wing and carried the ball at the Laois goal, holding off the challenge of Kevin Meaney and Conor Boyle. With Eoin Culliton approaching, he tried to hand pass a point, but a back tricking John O’Loughlln tried to cut out the ball. He got his fingers to it, but then got no reward for his efforts when the ball dropped Into the net

To Laois’ credit, they composed themselves after that setback and hit the last point of the half, through Gary Walsh, to trail by just two at the break, 1-6 to 0-7.

Laois had the first chance of the second half, but Ross Munnelly’s rushed effort came to nothing, with Dublin counter attacking and winning a free 45 yards out, which Stephen Cluxton pointed.

Colm Kelly responded In kind with a great pointed free from distance Into the Hill, and that set the tone for the rest of the second half. Dublin would edge away, and Laois would try to pull them back in. They almost drew level midway through the half after Ross Munnelly’s free got them to within one point at o-io to 1-8, but they just couldn’t get the scores they needed to make a game of It.

With time almost up Dublin lead by two, and there was still time for controversy as well. Cormac Reilly Inexplicably signalled just one minute of added time, all of which was used up by Stephen Cluxton coming up the field to take a ‘45.

There was only time for Laois to take the kick out, as there would be no last siege on the Dublin goal. The game, the season and Laois’ hopes ended there, but already we can look to 2013 with renewed optimism.

Healy wasn't just the best player for Laois, he was easily the most impressive player on the field for either side.

After a shaky start, when he misjudged the flight of the ball and allowed Bernard Brogan in on goal, he completely dominated his battle with Dublin's marquee forward. When Brogan went to sleep on Saturday night it was probably with visions of Healy burnt into his mind, as every time the ball came near him the Portlaoise man bottled him up.

Using either a hand, shoulder, chest or whatever it took to disrupt Brogan, he did just that, with Pat Gilroy calling him ashore before the end. Healy deserves an awful lot of credit for how he handled Brogan, which he didn't really get. Peter O'Leary, Brendan Quigley and Billy Sheehan all played superbly as well.

Dublin's goal. It came at a time when Laois were well in the game, and had taken the lead on four occasions prior to O'Loughlin's ill-fated intervention.

They would never lead again after that score, and it was the goal that allowed Dublin to keep Laois at arms length for the rest of the game.

The manner of the goal as well, a flukey deflection from a last-ditch attempt to block down Michael Daragh McAuley's fisted effort was particularly deflating too, and Laois players looked a little shell-shocked after the score went in.

They got back on track with the game plan after that but they never bridged the gap the goal created.

This is dealt with elsewhere in these pages in more detail, but it defied belief when only one minute was signaled at the end of the game. When Stephen Cluxton took almost a minute and a half to take that late 45 Laois at least deserved one last assault on the Dublin goal, but weren't even given the opportunity. Would Laois have got a goal to draw the game? On the basis of what went before, you would say they probably wouldn't have, but that doesn't mean they didn't deserve the adequate amount of time to be added on.

If Dublin repelled them then well and good, but Laois should have had the chance, and Cormac Reilly has rightly come under scrutiny for his decision when you consider there were ten substitutions and countless frees in the second half alone.

After a tough run of games in the

All-Ireland qualifiers, Laois' season is now over, and they have the time to look back on what they have done in the year.

After the loss to Longford it looked like Justin McNulty's future as Laois manager could be measured in terms of weeks, but he deserves great credit for getting the players focussed and building them back up through the qualifiers.

There is something there to build on for next year now, a resolve in the team and a sign that they can compete with some of the top teams in the country. Presuming McNulty is retained, there won't be anyone resting on their laurels, so the challenge now is to keep the momentum going into pre-season training so Laois can pick up from where they left off.

Justin McNulty has come in for a lot of criticism over the last two years, from a lot of angles too, in these pages, at county board level and from supporters, but his blueprint for success has taken shape over the last two months.

The game plan on Saturday wasn't pretty, but it was effective and gave Laois a chance, which is as much as anyone could have asked. It was also noticeable how well Laois handled the occasion, as they showed great patience for some scores and didn't seem fazed by the atmosphere. All credit to McNulty and his team for that.