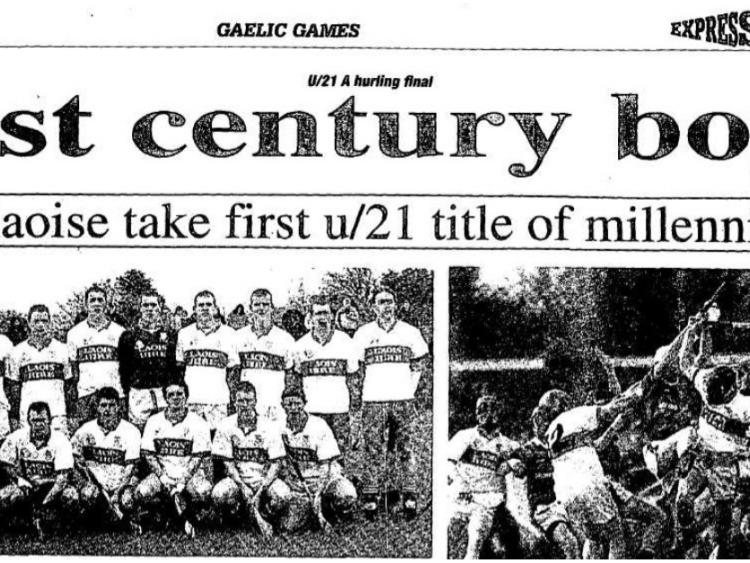 *This article was originally published in the Leinster Express on April 29, 2000

Portlaoise, who won their first u/21 hurling title in nineteen seventy eight defeating Abbeyleix with such household names as Billy and John Bohane, Matt Keegan, Pat Critchley, Gerry Browne, Moss Prendergast and Seamus Plunkett, collected the first title of the new century with a comprehensive victory over Rathdowney at the latter venue on Monday afternoon.

Portlaoise were collecting their first title in thirteen years and only their fourth in all.

Portlaoise were hot favourites to win before a ball was pucked in the competition, but rode their luck in the opening round victory over Borris-in-Ossory.

Rathdowney were fortunate in both their opening games but on Monday never looked like making it three wins out of three.

Playing into the breeze in the opening half, the homeside failed to score until the twentieth minute. By that time Portlaoise’s best player, Brian McCormack, had scored five excellent points including a free from seventy metres.

In between Tom Fitzgerald, the winner of an u/17 medal at the same venue earlier this year, scored a fine point. Niall Fitzpatrick scored a good point but midfielder Joe Phelan scored the game’s best point from a line ball after eighteen minutes.

When Peter Gray missed an easy free it looked bad for the homeside but he did score a minute later from a close in free.

Midfielder Pat Phelan added a second a minute later, before top scorer, full forward Jim Doherty pulled first time, only to see the ball go over the bar. Portlaoise finished the half with further points from Brian McCormack and Tom Mulligan to leave the interval score 0-10 to 0-3.

It would be a brave man who would bet against The Town at half time despite facing the wind on the changeover. Peter Grey scored the opening point of the new half from a line ball, Pat Phelan added his second after thirty five minutes and a recovery looked on. An injury to a Rathdowney player held up play and they also lost sub Greg Phelan through injury, he had only joined the squad five minutes earlier and was replaced by sixteen year old Tom Drennan.

At the other end Tom Fitzgerald added his second point after 42 minutes. Whatever chance

Rathdowney had disappeared two minutes later - the home defence got into a Chelsea like triangle and Pat Phelan ran out to kick the ball to an empty net.

There was no way back now, but late points from Pat Phelan and Peter Gray from an excellent line ball put a respectable look on the board. Sub Morgan O’Sullivan closed the scoring with a well taken point. Portlaoise won without ever playing to their full potential.

For the losers, no fault of John Paul Ryan in goal, Noel Brennan, Gerry Keogh, Alan Delaney in defence, Pat Phelan at midfield and in attack Jim Doherty, Tom Mahon and Peter Grey did most.

After the game, Co. Chairman. Dick Miller presented his first championship trophy to Portlaoise captain Tom Mulligan and paid tribute to the host club for the wonderful arrangements. He congratulated Portlaoise on getting the new millennium off to a great start.