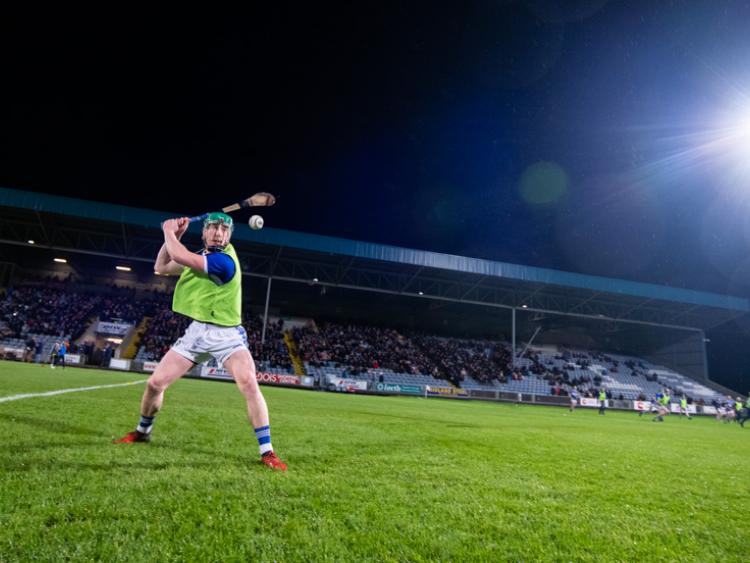 Laois hurler Ross King warming up ahead of their NHL Round 1 game with Wexford under lights at MW Hire O'Moore Park earlier this year. Photo: Denis Byrne

As part of Laois GAA’s plan for MW Hire O’Moore Park to become the first ‘green stadium’ in Ireland, the County Board have tendered the contract for the installation of LED floodlights at the venue.

The county board's contract offer would see a contractor design, supply, install and commission a new pitch lighting system at the county grounds, with the current setup retrofitted to LED bulbs.

The internal and external lights of the main stand, including the dressing rooms, and the street lighting at the grounds is also to be upgraded to the new LED technology as part of the contract.

The existing masts which are in place would be retained and upgraded to house the new LED system. In total, the project to make MW Hire O’Moore Park Ireland’s first green stadium will cost approximately €400,000 with the upgrading of lights costing over €300,000. In the long run, it is aimed the lights will cut energy costs by up to 50%.

“The upgrading of the lights is only part of our plan to be the first green stadium in the country. All the lights are going LED. It’s a major job with the lights costing over €300,000, but the energy savings will be massive,” explained Laois GAA Chairman Peter O’Neill.

“The LED lights are better in general. They’re better for television, and they are more sustainable in the long run too. The initial outlay is hefty but it will pay for itself over time.

The current system was installed 12 years ago with the bulb’s predicted lifespan of 10 years. At present, 12 of the 192 bulbs used in the current lighting set up need to be replaced at a cost of €20,000.

“It was a project that had to be looked at because to replace the bulbs that are there at present would cost in excess of €200,000, and their lifespan is nearly up. They were installed about 12 years ago and they have a 10 year lifespan.

“The lighting we currently have is excellent and it has certainly served us well, but this new lighting is all measured to perfection and it’s a considerable upgrade. Things move on and this is a much better system for a number of reasons.

“It can all be managed from a central location and it is all computerised. Aside from matches, say if you have a concert; you can switch on and off individual lights. You’ll have the ability to turn on lights much quicker without the same warm-up time which will be great facility to have.

“It’s not just the floodlights for the pitch, it’s the whole walkway around. The dressing rooms, the street lights. There’s a massive amount of lights in the stadium that people don’t even realise.

“MW Hire O’Moore Park will be the first stadium in Ireland to be retrofitted with the LED technology. It’s all part of our plan to reduce bulbs, reduce our energy consumption and our carbon footprint and become the first green stadium in Ireland. All tying in with Portlaoise’s bid to become Ireland’s first low carbon town,” finished O’Neill.

The retrofitting of LED lights at the county grounds is one phase of their project to become the first green stadium in the country. The project is backed by Croke Park, Laois County Council, Laois Partnership, LCDC and the Sustainable Energy Authority of Ireland (SEAI).

Tipp Energy based in Cahir, Co. Tipperary have been appointed Project Managers for the stadium plans.

Currently, Páirc Uí Chaoimh is the first stadium in Ireland to feature the technology with most others using the older high intensity discharge (HID) lamps. HID lights are cheaper from a capital point of view but LED lights are far more energy-efficient. O’Moore Park, however, would be the first retrofitted stadium to implement the move to LED lighting.

The project is currently out for tender and once a contractor is selected, works will commence immediately with a completion date set for October 1, 2020, while the County Board aim to launch their full biodiversity project in the weeks to come.