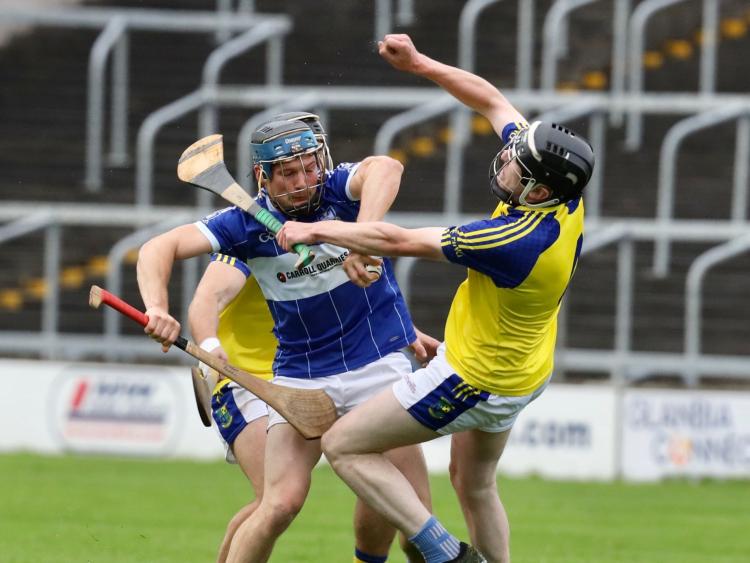 Action from Abbeyleix and Castletown on Saturday evening

In a clash between two teams whose primary target for the year will be to avoid any relegation scrap, it was Abbeyleix who got the better of 14-man Castletown to head to the top of Group A.

Abbeyleix made a strong start to this encounter, as they landed three points in swift succession. Eoghan Fennelly fired over two points, one from play and one from a free, in between a Fionan O'Mahony score from range.

Brendan Reddin got Castletown up and running for this year's championship, and Conor Phelan then set up Reddin nicely for his second score in a row.

Abbeyleix were forced into an early change after Rory McEvoy was hauled off through an early injury, with Aaron Carroll taking his place.

Eoghan Fennelly replied by knocking over another free, and then Eoin Reilly raised another two white flags with two fine efforts.

Dylan Conroy grabbed one back for Castletown, but Fennelly placed over another two frees to extend Abbelyeix's lead.

Castletown looked to finally get into this game when they got their first goal. Dylan Conroy spotted Conor Phelan free in the square, and he dispatched with ease.

However, it was Abbeyleix who responded to the goal stylishly. Fine efforts from Ciaran Carroll and Fionan O'Mahony from play meant they led by four again.

Fennelly and Conroy swapped frees, before Declan Phelan and Ciaran swung over two more brilliant Abbeyleix scores, and the game was beginning to get away from Castletown.

It looked like they could be in even more trouble minutes later, as centre-forward Joe McCormack was given his marching orders after he lashed out.

The red card seemed to almost wake up the fourteen men of Castletown though, as they finished the first half strongly. Dylan Conroy (two frees), Ryan Mullaney and Conor Phelan landed points, as Castletown only trailed 1-8 to 0-13 at half-time.

Castletown were looking to start the second-half the way they ended the first half, but they couldn't maintain that momentum. Abbeyleix swapped scores through Enda Rowland (free) and Fennelly (free) with Castletown's Martin Phelan and Dylan Cuddy (free).

Liam Delaney and Ciaran Carroll added points to extend the Abbeyleix advantage, before Dylan Conroy left five in it once more. Fennelly and Conroy exchanged frees, before Abbeyleix finished off the game as a contest with a goal.

Ciaran Byrne fired home the goal, and Abbeyleix left O'Moore Park with the points on offer.