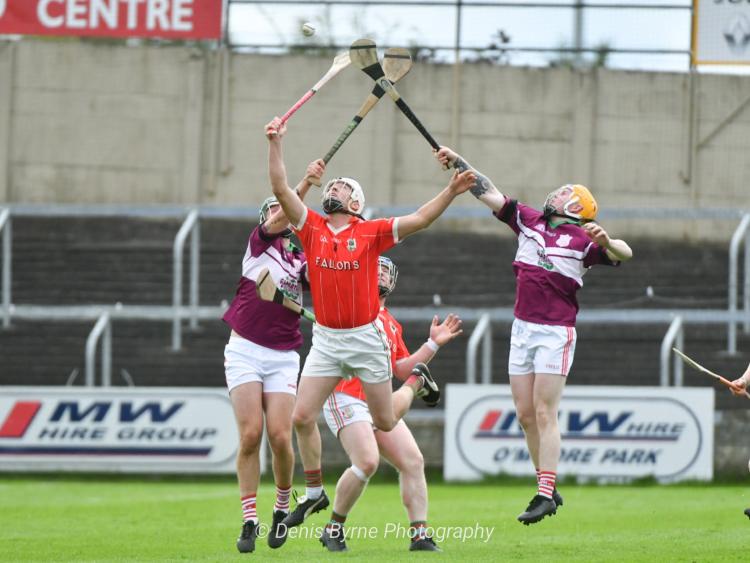 Clonaslee sent out a statement in the Premier Intermediate hurling championship on Sunday afternoon as they beat Mountrath by 12 points in MW Hire O'Moore Park.

After an even enough opening half, Clonaslee pulled away in the second half with Laois senior football keeper Niall Corbet finding more room to inflict big damage up front with his speed and power.

This will be a setback for the Mountrath men under the guidance of Offaly man PJ Murray but for Clonaslee, the only dampener will be the injury to DJ Callaghan in the opening half.

Clonaslee got off to a strong start with three DJ Callaghan placed balls sending them into a 0-3 to 0-0 lead after just three minutes.

Gavin Sydes responded with a free of his own for Mountrath but Clonaslee were full value for keeping their noses in front as Glen McEvoy and Patrick Hyland opened their accounts.

Leading 0-5 to 0-2 at the water break, Clonaslee then lost DJ Callaghan through injury and he was a loss to them.

Mountrath were now under pressure but they hit a purple patch and went from trailing by four to being level with stand out scores from Paddy Williams and Dylan Russell helping them to make it a 0-7 to 0-7 game.

Clonaslee then hit three on the bounce in first half injury time with William Young driving one over from inside his own half.

Brandon Russell drove over a routine free with the last action of the half as Clonaslee led by two points – 0-10 to 0-8.

Frees from John Rowney and Liam Senior boosted their advantage early in the second half before a Niall Corbet goal put the result beyond doubt at 1-13 to 0-8.

John Rowney, Robert Downey and Corbet all tagged on points before Conor Gorman in the Clonaslee goal saved a Brandon Russell penalty with 10 minutes remaining and with that penalty save went any hope of a Mountrath comeback.

Try as they may, their wide count killed them and Clonaslee looked that bit fitter coming into the closing stages.

Clonaslee did their score difference no harm in the closing stages as they got to the 1-20 mark as Patrick Hyland and Niall Corbet added tidy scores to increase their tally.