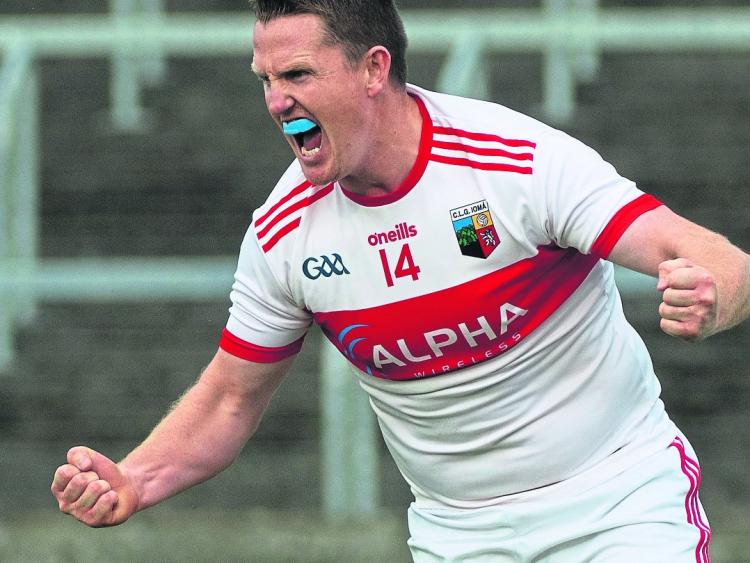 Emo roared into the Round 2 winners section of the Laois SFC with a win under their belts at the Laois GAA Centre of Excellence this evening, defeating last year’s finalists, Killeshin, with eight points to spare.

Moved from the original venue of Park-Ratheneiska this afternoon, Pitch 3 in the CoE played host to this encounter as Storm Francis made his presence known particularly in the opening half. While the rain from the previous night and earlier in the day abided, the wind played a factor in this clash.

Emo, playing into the strong gust in the opening half, were fastest off the mark with a goal arriving directly from the throw-in courtesy of youngster Paddy Hosey after Finbarr Crowley and Nigel Murphy combined to create the chance.

In the two minutes that followed, Emo could have had two more green flags had it not been for excellent blocks by goalkeeper Shane Coakley and centre-back Kevin Ryan as Emo threw down the gauntlet early on.

Killeshin soon caught up to the pace of the contest and quickly announced themselves with a sweetly struck David Aston free getting them off the mark five minutes in. Shortly after, Ross Bolger did well to keep a long ball in alive on the endline and the ball broke kindly for Evan Lowry to blaze to the net.

They almost had a second a minute later when Lowry’s insightful threaded pass through to Cathal Brennan on the edge of the square caught Emo napping, but uncharacteristically for Brennan he pulled his shot and it trickled out to the left and wide from near point-blank range.

Aston increased the wind-backed Killeshin’s lead with his second placed ball, this time a ‘45, and then Brennan made amends for his previous miss after the Lowry brothers, Eoin and Evan, combined to pick him out and he made no mistake this time around.

Emo stemmed the tide with Paul Lawllor’s first point of the day, but the Killeshin lead was back to six directly after as Ross Bolger converted a mark. Emo settled before the water break arrived with Hosey and Lawlor pointing, either side of another goal chance, to leave the margin at three points.

Emo picked up where they left off after the short break, Lawlor tapping over a free he won himself. Killeshin replied with a booming score from Evan Lowry 45m out - but this was to be their last score for all of 38 minutes.

Coakley was again called to action as Finbarr Crowley broke through the defence, but the Killeshin ‘keeper was equal to his effort. Lawlor blazed over from point-blank range minutes later much to the relief of the Killeshin line, and he added another to close out the half as Emo trailed by the minimum at the interval.

Against the wind in the second half, Killeshin struggled in the final third. Emo, on the other hand, found their stride and rattled off ten unanswered points. Darren Strong was in top form to rattle off four, while Lawlor and his full-forward line partner Jack Owens both struck for three apiece as Emo dominated the proceedings.

A flashpoint came late on as Killeshin substitute Brian Lowry saw the line after all of about a minute on the field following an off the ball incident with Finbarr Crowley.

Deep into injury-time, Adam Deering bore through on the Emo goals and he was hauled down leaving referee Seamus Mulhare with no option but to point to the spot. The usually pin-point accurate Eoin Lowry stepped up to the kick and blazed over to round off a difficult night for the 2019 finalists.